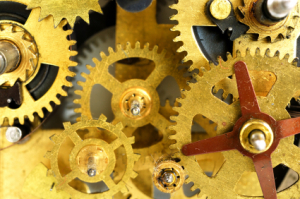 We’ve already told you a ton about why and how social media sites like Facebook and Twitter can be a vital part of your online empire. K.S. Brooks has even shown us how to build one. (Minions and Death Star sold separately.) But is the timing of your posts and tweets important? Um, probably.

According to a report published earlier this year on Social Media Today, if you’re a business or a brand (authors, you are a brand, yes?) your best chance to get engagement on your Facebook post is Saturday and Sunday. Again, common sense, right? Most of us aren’t working and can peck around on social media at a more leisurely pace, between carting kids to quidditch matches and dinner with the in-laws. Wednesdays are the worst, for some reason I don’t understand, but the metrics reported the lowest engagement rate of the week. I don’t feel particularly engaged on Wednesday, how about you? But you’d think that if you were feeling those Hump Day blues, you’d pop online and commiserate with your friends, no?

Yet another report from Lori Taylor’s blog, Social Caffeine, published at about the same time, says to stay away from weekends like last week’s gruel, the best time to post on Facebook is between ten a.m. and four p.m., and the Twitter action is happening between one p.m. and three p.m. Huh? They even go as far (in a spiffy-looking infographic) to parse out the best and worst times to engage on not just Facebook and Twitter, but Pinterest and Google+ and LinkedIn, oh, my. My calendar just got about ten times more complicated.

Some of what they’ve unearthed leaves me scratching my head, especially when I compare the two sources. Much of this seems to be geared around the business day. But again, some of it is common sense. Imagine how Internet usage and social media flows through the average person’s day. Maybe you check in before you go to work or school. Feeling a little antsy around eleven? Get a cup of coffee and see if anyone’s on Facebook. During lunch? Definitely. Some companies block employee web usage until lunch hours, during which you can compare weather reports around the world and play Words With Friends to your heart’s content. I’ve wandered around crowded areas during lunchtime, and I’m surprise there aren’t more pedestrian collisions: everyone’s checking his or her smart phone for the latest Grumpy Cat picture. Some metrics (see above) disagree, but I’ve found that the most popular time to engage on Twitter is between three and five in the afternoon. There’s a reason why author Isabel Allende calls this the PMS of the day. We’re tired, a little crabby, maybe the clock isn’t moving fast enough. We want to procrastinate a bit. Checking your Twitter feed, even briefly, can be a welcome break to help you get through the rest of the day.

This can be handy knowledge if you’re doing business locally. For example, if you’re trying to get people to come to your physical book event, you can spread the word during times that folks are most likely to be FaceTwitting. If you run an international business (say, letting the whole world know about your book promotion) and you are handy with time zones, you can sit in your writing cave in New York and catch your West Coast friends just when they might be goofing off taking a much-needed break and let them know your zombie romantic thriller cookbook is free RIGHT NOW!

But these are only general guidelines. The most important thing you can do is to know your audience and generate a rough idea of their daily schedules. Stay-at-home-moms have a different flow than office workers. College students have a different routine than healthcare workers. If you’re promoting your paranormal YA book, work your tweets and posts around the school day. Know the holidays and vacations. Know when final exams and scary placement tests are given. But don’t do it in a stalker-ish kind of way—it’s research! Or, for example, the protagonist of your thriller is a runner and you’re trying to reach runners as a sub-market. So do some research to find the most popular time they train [hint: early morning and early evening, with some adjustment for Daylight Saving Time and climate] and when they’re more likely to be in front of their computers.

Also, do your own research. Use Facebook Insights, Timing+ and general snooping about to see which of your messages were the most popular and note when you posted them. Experiment with different time periods and different content and check your results. Looking for some general ways to get more engagement on Facebook? Check out Jim Devitt’s recent post on the subject.

But timing can work against you, especially those of you who schedule tweets or posts in advance on utilities like Hootsuite. Earlier this year, after a particularly good week, I wrote a blog post wrapping up the highlights. I led with a picture of Danica Patrick, the NASCAR driver, who had at the time become the first woman to win pole position at Daytona. (The driver with the fastest qualifying time wins the right to start a race in first place.) I wrote that she and NASCAR were also having a good week. I’m glad I hadn’t put up a bunch of tweets about it on Hootsuite, because the next day, a car crashed into a wall at Daytona, and a bunch of fans were badly injured by flying engine parts. A good week for NASCAR turned horrific very quickly. And I would have looked like a tone-deaf idiot for having all those chirpy Tweets still popping up out there.

Have you found any patterns to the effectiveness of your FaceTwit posts?

23 thoughts on “How Important is the Timing of Your Social Media Posts?”