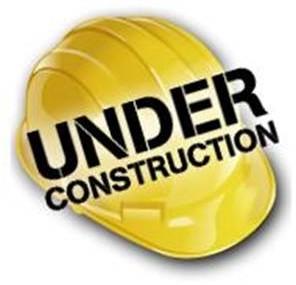 The other day my partner Mark and I put down the flooring in a spiffy new building project in our back yard: an ‘Accessory Dwelling Unit’, or ADU as the city likes to call it. It’s actually a mother-in-law apartment for my parents to use when they decide they can’t hack the Arizona heat and yearn for some fresh, cool, northwest air. This tends to be every year about the time the temps in Phoenix scream into the triple digits. Go figure.

How does that relate to writing, you ask?

At the same time that we were prepping the concrete to install the flooring, one of Mark’s guys was busy taping off the non-paintable areas outside the structure in order to apply primer. The prep for both tasks took longer than the actual work itself and it occurred to me that it was a great analogy for what a writer does when writing a novel.

It’s all about preparation. Professionals in any trade, be it construction, cartography, nursing, or pole dancing, all end up going through an apprenticeship of sorts before they’re considered a pro. You can’t get an electrician’s license unless you go through training. Same with becoming a nurse, or a doctor, or a mason, or a massage therapist.

Writers are a different lot, but there’s still training. It’s just not certified by a state board. Unless you count getting an MFA—which is still optional and not at all required.

When I first started writing with intent to publish, I basically had a rough idea for the book in my head and dove headlong into writing, stopping along the way to research when I needed, but mostly writing wherever my way-too-active imagination took me without much of a plan in mind. (For those who aren’t familiar with this type of writing, this is called ‘pantsing’, where you fly-by-the-seat-of-your-pants while writing.) My first book took a year to finish.

Not just a little suckage with the possibility of saving some of the scenes or characters or what have you. I mean MAJOR suckage. Blow that bad boy up as soon as I could get a hold of some C-4 type suckage. The scariest part was that I didn’t realize how bad it was at the time. I made every newbie mistake known to writers and possibly some unknown, but I thought it was golden and submitted to boatloads of editors and agents.

Well, duh. I was lucky I didn’t receive the aforementioned C-4 in a package along with my manuscript from one of the Big 6.

Fast forward to the next book. The second novel took a year for the first draft, then about another year or so to edit, taking classes, talking to other authors, learning how to avoid the pitfalls of the newb as I went. Learning the craft. I can’t stress this part of the writer’s journey enough. And, it never really ends. There are always more cool classes to take, or weaknesses to shore up, or better authors to learn from. That’s actually one of the things I like most about being a writer. It’s not a stagnant occupation. But, I digress.

Okay, so the second book was better, but not good enough. I’d become a little gun shy, which is a very, very good thing in this case. The third and fourth novels were where I learned how to write lean by cutting out anything superfluous. I cut so much from them that 80k-word novels became 25-35k novellas. To test the waters, I self-published them. Happily, they sold.

But, I certainly didn’t think of myself as a professional writer. Even now that I’m writing full-time and earning a ‘salary’, I know I have a looong way to go before I’d consider myself a pro.)

Then I took a class titled, “Plot Your Novel in Two Days” taught by the fabulous Mary Buckham. She was one of the first people in the industry to see something in my writing and was also one of the first writing teachers who could convince me to actually try and plot a novel. Up to that point my idea of plotting was to leave myself little notes at the end of each day’s output to remind me of what I thought should happen next. I believed plotting a novel would throw water on the fire of my creativity or some such nonsense. She showed me how to use both plotting and pantsing together to create a coherent, fast-paced, plot hole-proof novel, fast.

That class was a major turning point for me. Now, I use her approach (loosely) to figure out the trajectory of the story, the character arcs, internal and external problems, plot points, black moment (or, in the case of my current series, the several black moments.) I’m able to write much faster and with fewer drafts. I still allow my imagination (re: my characters) to direct the scenes, and sometimes my idea for a novel isn’t the right story at the right time, but as long as I do the prep work beforehand, the writing becomes the easiest part.

Just like installing a floor or painting an ADU.

Obviously, there’s more to prepping your novel than just figuring out the plot. Research and interviews fall under the same category, as do character sketches, etc. And, I certainly don’t think that the way of doing things outlined above is the only way to go. I know writers who are OCD when it comes to plotting their novels and wouldn’t think of winging it who write fantastic books. I also know fabulous writers who swear by letting their subconscious take the lead in all things writing. Whatever gets you to the point where you can write a novel that you’re happy with, works.

But it all takes some form of preparation.

Writers don’t come from the womb, pen or computer in hand (ouch) with the ability to write a novel. First, they have to learn how to use language, then write, then reason. Learning the craft of writing is the same.

What about you? How do you ‘prep’ for a novel? What have you learned along the way that might help someone starting out?