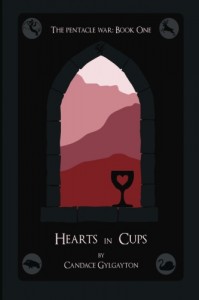 Today we have a sneak peek from the epic fantasy novel by author Candace Gylgayton: Hearts in Cups.

Where will the lust for power lead the unscrupulous – or the unwary? Power abhors a vacuum and, with no legitimate heir, civil war is brewing in the Pentarchy. Far from home, family or friends, Hollin is using her own gifts and abilities to track down the one man capable of restoring order to the kingdom. But time is running out and the deeds of valor have become entangled with those of deceit. Soon the many shifting facets of magic, in all its guises, will determine the ultimate fate of the realm. Can one woman prevent the fall of night?

The Pentacle War: Book One – Hearts in Cups is available from Amazon and Amazon UK.

And now, an excerpt from Hearts in Cups…

The snowcat was impressive: frightening and beautiful in the same instant. Its fur was long and pristinely white. Close to fifteen feet in length from its elegant whiskers to its gently twitching tail, it watched them from opalescent eyes with pupils slitted in response to the noon light. For many minutes cat and humans stared at one another; Hollin was curious, Daffyd anxious, and the snowcat enigmatic.

At last Hollin discerned something and softly spoke to Daffyd. “It’s standing on a ledge.”

He looked up and saw that indeed, the snowcat was balanced on a ledge, and a ledge that could be reached from the ground. He caught his breath as the snowcat rose from its crouch. Still watching them, it walked slowly up the wall.

“The path!” Hollin exclaimed in subdued excitement. “Do you see it? It goes up this cliff!”

“Yes, but it has a snowcat sitting on it! It is just as likely to lead to the snowcat’s den as to take us out of the valley.” He was clearly skeptical.

The cat continued climbing until it was fifty or sixty feet above them. Then it stopped, sat down and regarded them once again.

“I don’t think it wants to harm us,” Hollin remarked, intently watching the snowcat. The snowcat returned her stare unblinkingly. “We must follow it,” she announced quietly. As if in response, the snowcat stood and climbed another ten feet before stopping.

“That is madness!” was Daffyd’s appalled response.

“Nevertheless, that is what we must do. Go fetch the packs, I’ll wait here.” Her manner was preemptory as she concentrated on the animal on the cliffs above.

“Lady Hollin I beg you, do not follow the snowcat! What you propose is extremely dangerous. You are going to your doom to follow that thing!” His face was white and his voice harsh.

She turned to him and he saw the resolve in her face. “We must go up this path. If it is our fate to die by the snowcat, then we shall surely die; but I do not believe our death is up there.” She reached out to grip his arm. “You have sworn to be my paxman. You have followed me thus far, do not lose heart now, Daffyd!”

He breathed a sigh to steady himself and regain his composure. “As you command, my lady,” he replied, staring directly into her eyes. “I will go and get our packs, but take my sword while I am gone in case you are wrong about this.” He handed her his sword and retraced his way to their camp. She smiled to herself and returned to watching the snowcat. If the snowcat was not friendly and chose to attack, the sword would be as a twig against a storm.