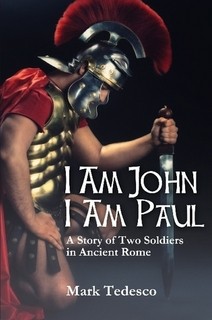 I am John, I am Paul; A Story of Two Soldiers in Ancient Rome
by Mark Tedesco
Genre: Historical novel
176 pages

John and Paul are Roman legionaries in the 4th century, who were forced into exile by their corrupt commander. John ends up in Alexandria where he seeks wisdom and meaning in the worship of Mithras, the god popular among soldiers at this time. During his exile in Egypt John is educated in the mystery cult and meets an Alexandrian woman from whom he learns the Egyptian perspective of life and events. During this time, his counterpart Paul is finding ways to secure John’s return, finally succeeding. The story is a sea of emotion as the two find themselves in Germania to serve. An event takes place that changes their fortunes and leads to them discovering “The Way”.

The nature of the bond of the two men to one another is left to the reader to decide, but their commitment ultimately leads them to a tragic yet beautiful destiny.

Mark, how did you come up with the title for your book? Does it have any special meaning?
“I am John, I am Paul” is a phrase used by the two protagonists about 2/3 way through the book. When they are called to meet with the Emperor Constantine they identify themselves, full of confidence and conviction in the road that has led them to this historical point. Their two names continue to echo through history as a sign of the bond possible between two human beings.

Who was your favorite character and why?
John is my favorite character because he is the seeker. He looks for the meaning behind things rather than just accepting them at face value. He delves into the Mithraic mystery cult in order to try to make sense of his exile; he later opens himself up to the “Way” so that he might partake of Paul’s journey. His courage and loyalty are unquestionable, yet he is able to feel empathy and love.

Does your book have any underlying theme, message, or moral?
There are several messages in the book which the author refers to subtly enough so that the reader might glean what he/she wills. This is evident in the reviews; some have seen the tale as an adventure of courage and friendship whereas gay readers have seen it as a story showing the love possible between two men.

What would/could a reader or reviewer say about this book that shows they “get” you as an author?
“I didn’t want it to end”, “Totally absorbed”, and “I could relate to every word” are some messages I received from readers. What one “gets” is where my experience or the humanity of one of the characters overlaps with their own. If one of my books enlightens the life experience of someone, then I have succeeded. What matters most to me is that the experience of the character becomes their own.

Give us an excerpted quote from your favorite review of this book:
“… a tale of loyalty and love that grabs you by the throat from the very first sentence and holds you spellbound, gasping for air as you’re swept from chapter to chapter…”-Tony McEwing, Fox News.

Where can people learn more about your writing?
My Amazon author page.