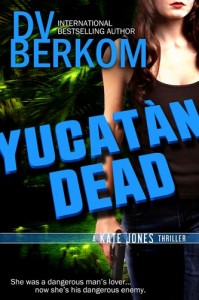 Today we have a sneak peek from Yucatán Dead,
the action/adventure thriller by DV Berkom.

For Kate Jones, being on the run from her former lover was never going to be easy. But with a new identity and a new life in Arizona, she was beginning to believe she’d made it through the worst. Then, in an act of twisted revenge, Kate’s kidnapped by the ruthless cartel boss, his intention to force her to pay back the money she stole before he kills her. Fate intervenes and she finds herself working against the cartels deep in the Yucatan, allied with a group of commandos. Kate must now decide for herself if she’ll continue to run… …or turn and fight the evil that pursues her.

Here is an excerpt from Yucatán Dead…

THE STENCH OF DECAY ROSE from the unforgiving mattress as I shifted to a sitting position. My breath caught as sharp pain lanced through my body from the effort. I ran my hands over my torso, checking for injuries.

The watery gray light from a high window covered in metal bars illuminated the block walls that formed my prison. Musty air gave way to a whiff of mold and mildew, reminding me of an old flooded cellar. The thugs who brought me here had masks over their faces and smelled of stale cerveza and garlic, a familiar and unwelcome aroma.

Judging by what I saw in the short trip from the cargo van to the hulking concrete building, I was somewhere in the tropics. Dieffenbachia and philodendron grew in wild profusion while aggressive vines climbed stately royal palms, choking the life out of them. The air oozed damp.

How the hell did you wind up here, Kate? Abduction wasn’t an entirely foreign event in my life, it’s just that it hadn’t happened in a while. Groggy from drugs and a vomit-inducing flight tied up in the back of a Cessna, pictures of a woman with short, blonde hair and familiar green eyes skated through my mind. Tired and disoriented, I couldn’t catch and hold the images to remember her name.

That didn’t stop the incipient panic sliding up my throat.

Footsteps broke through the fog in my brain and a curious cockroach I’d been watching disappeared through a hole in the bricks. I wished I could make myself that small and follow it, but it appeared my fairy godmother had taken the day off.

Not that she would have been much help. Hell, if changing my name, address, daily routines, and hair color didn’t make me disappear, then nothing would.

The sound of a key springing the lock echoed through the room. The door’s hinges creaked and I tensed, waiting to see who or what would emerge, working to combat the fear slithering up my spine. I tried to take a deep breath but couldn’t.

Hyperventilating is annoying that way.

Sunlight blazed into the room as the silhouette of a man stepped through the doorway.

The word came out as a deep grunt and matched the man who uttered it. Short and stocky with a deep scowl and no neck, his suave demeanor told me he probably wasn’t the resort director.

Although, the AK-47 in his hands might have been the clincher.