Our journey started back in 2009 when my son was still in high school. He was having trouble with school work in the form of being dyslexic and issues with cross modalities. Basically on top of all this, he hated school work. We tried for a long time to find a way to find something he was passionate about to help encourage him to do his homework and participate in school. We had an IEP or an Individual Education Plan in place that would help with the learning issues.

The one thing we found that Charlie did like to do was read books. He first discovered Christopher Paolini’s book Eragon and even though it was slow going the first time he read it, he liked it. He wanted to know more about the author and discovered that he was also a kid in school who had written a book and published it. Charlie was always coming up with story ideas for his journals at school. He would write the stories instead of the topic given.

The principal, at his wits end, finally gave him a challenge. The challenge was to write and publish a book. It had to include subjects such as language, math, history and geography. If we finished the book and it had these subjects he would get a pass/fail grade. He wouldn’t get an A or a B; he would just either pass the class or fail. END_OF_DOCUMENT_TOKEN_TO_BE_REPLACED 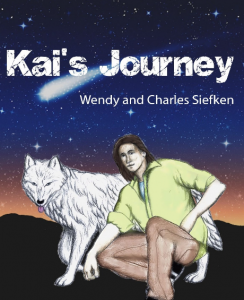 Kai’s Journey
by Wendy and Charles Siefken
Available from Amazon.

“Kai’s Journey” is a story about a young man, set ten years in the future. Kai has spent those years fighting for survival and trying to find a way rid the world of the disease his father created.. His father was a military scientist charged with the task of perfecting a formula that would create a superior breed of soldiers. Kai’s father accidentally created a race of zombies. Like a virus, it soon spreads to the entire world, unleashing a period of unsurpassed chaos and conflict.

In the midst of this turmoil, Kai comes across a young woman named Clover, who is part of a clan traveling across the United States to try to find what is left of humanity. Clover is a part of a clan of werewolves who can turn at will but aren’t blood thirsty savages as depicted in general history. .

Along the way Kai and Clover come across stragglers who join with the group as they journey across the upper part of what used to be known as North America.

One night while Kai and Clover were watching a meteor shower they meet a group totally out of this world. Kai and Clover begin a heroic journey, fueled by the increasingly dim hope that somehow, the human race will have a chance to start over.

I’ll be honest; I’d never done anything with Advanced Review Copy (ARC) readers until the release of my most recent collaboration with the Evil Mastermind, Triple Dog Dare. It was all new territory, and it felt weird.

I don’t like asking people for anything, let alone to read a 100,000 word novel and be ready to write a review when the book goes live on Amazon. That seems like a lot to ask of someone. I stopped reading books for review long ago when the requests to do so became overwhelming. I was receiving emails from complete strangers from all around the world (not kidding) – with their manuscripts attached – asking me to review them. Unfortunately, I had to draw the line. So, I had to be frank with other authors; I would not be able to offer a review swap.

So…what incentive do these people have to put this kind of effort into something for someone they may or may not even know? END_OF_DOCUMENT_TOKEN_TO_BE_REPLACED