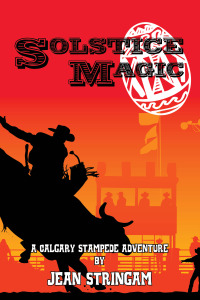 Read about the magical world of cowboys, rabbits, and Ukrainian goddesses that unfolds when Zo’s gruff baba from Ukraine arrives with her savage Caucasian Ovchorka dog. The ensuing chaos of clashing cultures catapults the characters into the extreme sport of rodeo at the Calgary Stampede. There, Vince Lapin, bull-rider extraordinaire, meets up with Susie Lago, protégé of Zo, and the outcome for the other rodeo contestants as well as the animal athletes changes stampede history. Good thing Zo has a best friend with an attractive older brother to soften the trauma.

Solstice Magic is available through Amazon.com and Amazon UK.

Here is an excerpt from Solstice Magic:

One
June 21st, the summer solstice at a small rodeo in southern Alberta

Vince Lapin wiped the dirt out of his eyes with his red bandana. Where was that bull? Yeah, the fence was open and the bull was trotting through it, two men on horseback at a judicious distance behind.

He’d stuck his ride, so there’d be a little money waiting for him at the end of the day. Not that money was what being a rodeo contestant was all about. Money was more or less a conundrum he had to work out. Vince would still have ridden the bulls. In fact, he’d have ridden every bull in North America if he’d had the time, but the solstice never came early enough to pick up any U.S. circuits, much less give him time to drop down to Mexico.

Vince thought about the bulls in Mexico, wondered about the bulls in Spain, curious to figure out how to alter his solstice landing so that he wouldn’t have to waste any of his precious time on travel. Was there any way to control his trajectory? Did his will have any influence on where he ended up? It sure didn’t seem like it, but he wished with all his soul he could determine at least this in his life.

Vince looked around at the cowboys hanging on the fences like a straggle of cats. There weren’t too many laughing faces in the group. Leave that to the spectators. This was serious business. These men wanted to make it to the big time. And for a Canadian cowboy—and a whole lot of European, South American, and U.S. cowboys, as well—the Calgary Stampede was it.

Time was everything to these men. The eight-second ride, of course. Those precious eight seconds that determined success or failure. Bonanza or bust. Sometimes even life and death. And every one of them knew the window of time was very narrow in which their bodies could endure the extreme sport of rodeo.