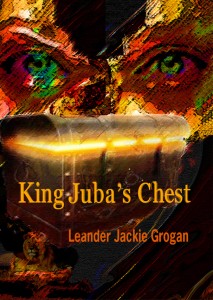 Today we have a sneak peek from the novel by Leander Jackie Grogan: King Juba’s Chest.

King Juba’s Chest is an American saga on the raw and dirty side of the tracks. From Juárez, the City of Dead Girls, an improbable young illegal Mexican immigrant eludes the spray of bullets from the ruthless Zetas cartel, claws her way through the choking dust of a collapsing smuggler’s tunnel, survives the ICE raids of the rat-infested colonias of New Mexico, finally, rising up from the ashes of poverty to become the CEO of a major American corporation. This is a sweeping tale of the miscegenation of cultures and the undeniable quest to scale the purple mountains and alabaster cities in the land of the free.

King Juba’s Chest is available from Amazon and Amazon UK.

Here is an excerpt from King Juba’s Chest…

Ruby watched with growing consternation as the two men whispered to each other. They reminded her of the demon voices that had haunted her childhood nightmares long ago. Yet, every bone in her trembling body told her this was far worse than a childhood nightmare. It was the grim reality of entering the promise land through the back door.

A few miles from the US-Mexico border crossing, they veered off the main street into a dark, abandoned alley. The driver, a ruddy-faced, sunburned man with a pot belly and hollow eyes, got out first. He was soon followed by his partner, a younger, muscular man with a double scar on his jaw, and wearing a cream-colored charro rodeo hat. He clutched a large brown paper bag in one hand, a smelly cigarette stub in the other.

“Salga!” The driver ordered them out like cattle. He lined them up at the back of the van, the smoky exhaust fumes, choking off their lungs.

“There has been a slight misunderstanding.” The driver spoke in a broken Spanish dialect. “Some of you have not paid your fair share.”

They all knew better. The total fee had to be paid in advance. Otherwise, the lowly travelers wouldn’t have been allowed to board the van.

The young teenage boy was with his mother. Shaking profusely, they both had begun to cry. The man in the cowboy hat walked over to them first, reached into the bag and handed them documents. “Relax, you are fine.”

He turned to Ruby and the other two women. “With you, we have a big problem.”

A thin Salvadorian woman in her late twenties with a red bandana handkerchief tied around her brow spoke up. “What is the problem?”

“I’m sure my uncle paid you in full,” she reported, a growing sense of desperation in her voice. “I’m sure of that.”

“Our records show a different amount. I am sure of that.”

Reluctantly, she reached into the zipped leg pocket of her brown Khaki pants. She counted out the 5,000 pesos with only a few hundred left.

He smiled. “Now that is the best way to straighten out this confusion.” He reached into the bag and handed her several documents.

The driver glared at Ruby. “You! Are you ready to straighten out your confusion?”

Ruby couldn’t speak. Her voice was buried under an avalanche of fear. If she could just remember what Carlos had told her to say. And then it dawned on her that she had written it down.

She pulled open the Velcro on the small pouched tied around her waist. She handed the driver a wrinkled piece of paper with two words scribbled on the back. The driver looked, then handed it to the man in the rodeo hat, the only one who could read.