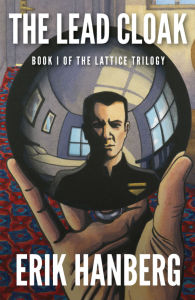 Today we have a sneak peek from The Lead Cloak, the science fiction novel by Erik Hanberg.

Byron Shaw can track and find anyone on Earth. Except the people who tried to kill him.

By 2081, privacy no longer exists. The Lattice enables anyone to re-live any moment of your life. People can experience past and present events–or see into the mind of anyone, living or dead.

Most people love it. Some want to destroy it.

Colonel Byron Shaw has just saved the Lattice from the most dangerous attack in its history. Now he must find those responsible. But there’s a question nobody’s asking: does the Lattice deserve to be saved?

The answer may cost him his life.

This book is available from Amazon, Smashwords, and Amazon UK.

Here is an excerpt from The Lead Cloak…

The Lattice … he didn’t have to be at the Installation to feel its presence.

Anyone connected to it could have universal knowledge of the present and past. The entire scope of human history, planetary history, astronomical history, was captured in the Lattice.

As easily as Shaw escaped into 1863 and the Battle of Gettysburg, so too could he soar over the rings of Saturn, as he’d done once on a tour of the solar system he’d taken with Ellie. So too could he witness Pompeii’s eruption. Travel into the Great Red Spot on Jupiter. Listen to Socrates speak in the Forum. Travel to the interior of the sun. Watch Columbus make landfall in the New World.

So too could he jump into the mind of another, as he’d done many times for work and recreation. After all, what was the mind but a series of electrical impulses, just as easily mapped as any other series of atoms?

He’d jumped into the mind of Einstein, to experience the rush of thoughts at the exact instant his mind was illuminated with the special theory of relativity. He’d jumped into the minds of women giving birth. Babies being birthed. People at the instant they died. Schizophrenics. Sociopaths. Artists. Politicians. Prophets. Cats! Dolphins!

He’d jumped into the mind of Jesus Christ, as almost all recreational jumpers had done at some point or another, just to see what was there. And, just as the jumpers before him had discovered, he found a mess of indecipherable thoughts. The mind of a madman? Or just what you would expect from a man who was both God and man? Even looking into the mind of Jesus gave equal evidence to the devout and the skeptics alike.

Humanity had the power to see and know everything, if only they bothered to look.

Maybe humanity wasn’t ready to cope with such abundance of intimate knowledge. But no one had asked humanity. In the twenty-eight years since Wulfgang Huxley had invented the Lattice, its continued ability to know more and more about people’s daily lives became … assumed. Commonplace.

The first incarnation of the Lattice was as a simple remote viewer, a camera that didn’t need a lens. A camera that could see anywhere in the solar system. Then scientists realized they could configure the Lattice to peer into the past as well. By the time those same scientists translated the Lattice’s data into decipherable thoughts, it was so entrenched in the world’s economy and society that there was no turning back. It was part of people’s lives, and the march of progress couldn’t be turned back. People just … adjusted.

One thought on “Sneak Peek: The Lead Cloak”