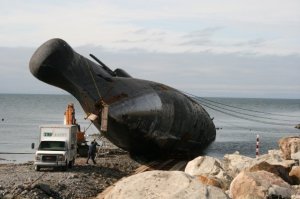 We found the derelict sub about 230 nautical miles off the coast of Virginia. She was just bobbing along on the surface, top hatch open and no sign of any crew.

She bore no number or insignia. Her instruments were strange, marked with unfamiliar characters and symbols.

When we towed her ashore, we could see the sides of the craft were emblazoned with glyphs reminiscent of those we’d seen in Mayan ruins. As Lassiter began to interpret the glyphs, I saw his face go pale…