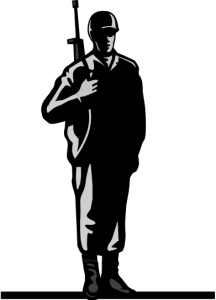 I spent 20 years in the U.S. Air Force, so I’m comfortable discussing U.S. military in general since I served along with all the branches. This will be a multi-part series about the most common things a writer needs to know if they’re going to have military characters or any kind of military items in their books.

We’ll discuss basic things that cover all branches of the service. Each branch has distinctive uniforms (which have become more distinctive in the last few years). But there are customs and courtesies that extend across all of them. Deciding if you’re making your characters enlisted or officers greatly changes how you will write the story. Having a mixture of both will give you a challenge but adds to realism.

Here’s the rank structure for all branches of the U.S. military:

Don’t worry if you can’t see them, links will be provided later.

Let’s move on to the salute. Or as it is formally known: Present Arms.

The origins of the modern salute are believed to date back to the era of knights. As a gesture of peace, they would use their right hands and lift the visors of their helmets, making eye contact, and showing they are not a threat. The modern day salute is a version of that movement.

Enlisted salute officers. Officers of lower rank salute officers of higher rank. An officer will never salute an enlisted person first. Rare exception: Medal of Honor recipients may be saluted by officers and enlisted regardless of their rank.

Saluting is normally done outside where you’re required to wear a hat (cover). There are, of course exceptions on when and where to salute:

1. Attending a ceremony that would be held outside, but due to inclement weather is being held indoors. i.e.: Change of Command ceremony. You will wear your hat and salute.

2. Being summoned to an office on official business. It usually means you’re in trouble, and we call that being “called to the carpet.” You won’t be wearing your hat, but you will salute the officer and provide a reporting statement.

3. You do not salute if you’re carrying heavy items and cannot safely render a salute. Instead you offer a greeting. “Good day, Sir/Ma’am.” The officer will salute and offer a greeting back (if they are polite!).

4. If you’re in a work detail, the senior person in the detail will salute for the whole group (who will still come to attention anyway).

Now I can tell you there is nothing more irritating than having an officer return your salute with what we call the “Captain Stubing.” Two fingers don’t cut it!

Next are some basic customs and courtesies. It goes without saying in the military that rank has its privileges (RHIP). If you’re enlisted, you’ll address officers as “Sir or Ma’am.” Sometimes lower ranking enlisted will address higher ranking enlisted by the same, although it tends to irritate the upper enlisted. They prefer to be addressed by their name and rank, or just rank. Such as: MSgt Rowe, or simply MSgt. Occasionally you’ll find some senior enlisted that get a bit “rank heavy” and demand to be called Sir or Ma’am.

The same goes for a lower ranking officer addressing a higher ranking one. When a superior enters the room, lower ranking individuals are expected to stand. Exception: if the person entering the room calls: “At ease, or As you were” upon entering.

Should you have to enter a vehicle; the junior member always enters first. And the senior member is the last one in and the first one out. This applies to boats, planes, and anything else that moves.

Finally I’ll briefly cover some standard drill movements. These commands are called when mass groups are being marched or in formation. There are two parts to a command: preparatory and execution. The preparatory command is used to “get your attention” such as: “FLIGHT, attention!” The execution part is what you will act on: “Column right, MARCH!”

If you are standing in formation, you’ll have a specific series of commands to listen for:

“Flight (or platoon, squadron, etc) ATTENTION!” You will snap to attention—heels together, toes pointing out at 45 degrees, and hands balled and resting at your sides.

“Flight, PARADE REST!” You will bring your left leg out to shoulder width, arms will bend at the elbows, and hands will be tucked behind your lower back, one palm in the other.

Each formation will have a commander (usually enlisted) in charge of the group, and on most cases a guidon bearer (who holds the unit flag). Those two people are out in front of the flight in positions of honor. If the formation is part of a larger group, you will have officers (unit commanders) in front of the flight commander who will relay orders from the adjutant. Military ceremonies are full of pomp and circumstance, and they can be LONG (sometimes more than an hour) to stand for. It’s not uncommon to have troops faint and “fall out” of formation.

If you can wrap your mind around that the military is actually a cast system, you’ll go a long way in understanding how and why they do the things they do. Much of the military way of doing business is steeped in tradition dating back over a thousand years. Granted some of it has been updated to fit modern needs, but the roots of it are ingrained in the past.

Next time I’ll cover the daunting task of military uniforms. Each service has a distinctive form of dress, and several versions depending on use. The U.S. Navy alone has a staggering number of uniforms. A writer can get in a serious muddle if they don’t know what their characters are wearing! So stay tuned for part two- U.S. military uniforms.

Links for this article:

16 thoughts on “Getting it Right: U.S. Military- Personnel”