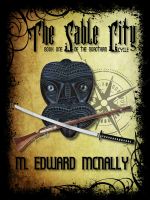 The Sable City
by Name: M. Edward McNally
Genre: Epic Fantasy
180,000 words
The first of (presently) four volumes of the Norothian Cycle, an epic series melding classic fantasy elements with the history, politics, economics and technology of a world in which magic functions. Or to put it simply: “Muskets, Magic, and Matilda Lanai.”

This title is available from Amazon US and Amazon UK.

Ed, how did you come up with the title for your book? Does it have any special meaning?
The Sable City is the location to which Tilda Lanai and the cast of characters are drawn, all for different reasons and with conflicting goals.

Who was your favorite character and why?
Tilda is the center of the story, and it was an image of her that popped into my head that got the whole ball rolling. The image was of a young woman slowly approaching a wounded warhorse on a steppe plain with an apple in her hand. I started writing the books to find out who she was.

Does your book have any underlying theme, message, or moral?
While the stakes of the story become high (as you’d expect from epic fantasy), the personal relationships among the characters continues to be the prime mover. That’s about par for human interaction in my experience.

What would/could a reader or reviewer say about your writing that shows they “get” you as an author?
I find myself sort of speaking to two audiences with these books. First, there is hopefully enough action, humor, and the like to engage a general reader. Second, there is hopefully enough complexity and depth to interest a reader who is looking for a little more from a book than they are likely to get from a half-hour sitcom.

Give us an excerpted quote from your favorite review of this book:
“It says a lot that I am writing this review. I hardly ever do so, but enjoyed this book and so wanted to share.”

Where can people learn more about your writing?
http://sablecity.wordpress.com/