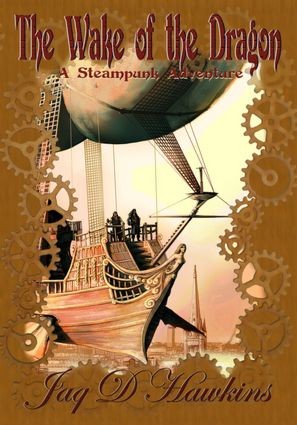 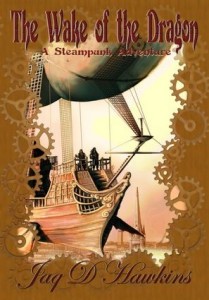 The Wake of the Dragon
by Jaq D. Hawkins

The cover of storm edge offers effective concealment for one airship that defies the elements to seek fortune for the rag tag aerialists who make up the pirate crew.

The elements are the least of their problems when they find themselves saddled with an airsick clerk and a love sick farm girl whose headstrong misconceptions compel her to seek adventure where no decent woman would wander unescorted.

Battling businessmen, mechanoids and villagers armed with torches and pitchforks, Captain Bonny must decide who to trust, and if the only rational course of action is one of apparent madness.

This title is available from Smashwords, Amazon US, Amazon UK, Barnes and Noble and Apple iTunes.

“Blessed is the influence of one, true loving human soul on another.” – George Elliott

Human beings have always been in love with love, or at least the idea of it. It is an emotion that is difficult to define – prone to clichés and lusty panting in Red Rooms. The softer side of love, its true soul, is more challenging for a writer to communicate to their readers. Why is this so?

Perhaps, this is because humans are prone to negativity, fear, anxiety and all the adjectives and adverbs that present themselves so easily to describe these emotions. Our natural tendencies seem to go in the direction of chaos and upheaval. Many people like to read about these subjects, so the writers who can create these novels provide what their fan base wants: dark, turbulent stories of murder and mayhem. We are entertainers, after all, and there is nothing wrong with filling this need. END_OF_DOCUMENT_TOKEN_TO_BE_REPLACED

QUESTION from the e-mail: I’ve always wanted to be a writer. Recently I finished my first book and got it published. Like most, I tried to promote it by getting book reviews. I got several three and four-star reviews, but many of the reviewers had a lot of negative things to say, too. Sure, they praise my story. They all like the action and suspense. But then they complain about my commas, and my “point of view,” and my characters all talking alike. I went to college. I got good grades on all my term papers, so I ought to know a little about how to write. This negative stuff is hard to hear. Half the time, I don’t even know what they’re talking about. How can there be “too many semi-colons?” You use them when they’re needed, right? Maybe I should just forget about this whole thing.

ANSWER: Good reviewers almost always talk about both the positive and negative aspects of a book. If they don’t, they are usually friends of the author who go and place a glorious, 5-star review just for friendship’s sake. So first thing I know from what you said is that these are “good, honest, unbiased” reviews, not the kind you pay for. They looked for things to pick on as well as nice things to say. That’s “fair and balanced” and tells folks right away that your reviewers are being honest with their praise. Every first novel gets hit hard by reviewers. END_OF_DOCUMENT_TOKEN_TO_BE_REPLACED

Kirk Alex grew up in Chicago. He found himself in the jungles of South-East Asia at age 19. He returned to the Windy City and bought himself a typewriter. “Little did I know that it would take years to develop a style, a voice, let alone get anywhere with it. Headed west soon after: LA, and that madness.”

Kirk Alex has worked as a furniture mover, delivered phone books door-to-door, driven a taxi, was a movie extra, a factory hand, painted apartments, and worked as a shipping clerk at a mail order video company.

“Bottom line: My Olivetti/LETTERA manual typewriter provided the only light at the end of the tunnel. Granted, it may have been a weak light, still, it was the only lifeline available. Without books/writing, I might easily have ended up in a straitjacket in a rubber room motel somewhere, or dead.” Working the Hard Side of the Street

Late at night is when most of the craziness takes place in Hollywood; wannabe starlets, models, partiers and players are all out strutting their stuff. From the lascivious to the lugubrious, former L.A. Cabbie Kirk Alex has seen it all.

Every fare has a story and is a story in this collection of shorts. No one has a better front row seat for the action than a Los Angeles cab driver. Working the Hard Side of the Street contains eight raw and real tales from author Kirk Alex’s years as a taxi driver. In a city built on broken dreams, sometimes a nightmare will get in your cab.

This title is available from Amazon in print or Kindle format.