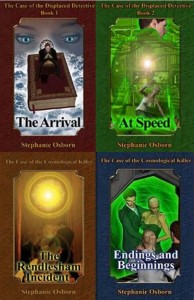 Over the years, an adoring public has been unable to let Holmes go. Sir Arthur Conan Doyle himself was forced to “resurrect” Holmes from certain death at the Reichenbach Falls—and authors worldwide since have continued to create stories based on his immortal character.

Yet Osborn’s take on Holmes is both faithful and unique. “I have created what I believe is a compelling Sherlock Holmes story unlike any other, dropping him unprepared into a completely different spacetime, challenging even his steel grip on logic and reality,” she says.

The series has already developed a fan following, eliciting comments such as the one below, originally posted on the “Ideas Like Bullets” reviewer’s blog:

“THE CASE OF THE DISPLACED DETECTIVE: THE ARRIVAL is a fantastic spin on the Holmes mythos and does the character and his creator great honor. This is definitely Doyle’s Holmes, a man who, although he assimilates to blue jeans and computers quite well, is clearly still of the sensibilities, skills, and quirks he has always been.”

Learn more about Stephanie and all her books at her Amazon author page and her website.