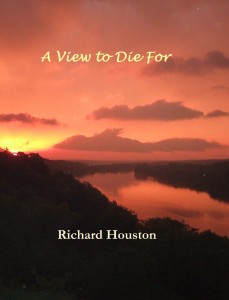 Author Richard Houston is pleased to announce the release of his new mystery novel: A View to Die For.

Outsourced software engineer Jacob Martin is trying to make the best of a divorce and mid-life crisis when he gets a call at two o’clock Sunday morning from his mother. His sister has been arrested for murder, and his father is near death. Thus begins an adventure that takes Jake and his golden retriever from their Colorado retreat to a backwater town in the Missouri Ozarks where he gets on the wrong side of a sheriff deputy. Then, just as Jake is ready to go back home, his sister drops a bombshell with a story only Louis L’Amour could write.

A View to Die For was released on October 8, 2012 and is available through Amazon.com and Amazon UK.

You see, I’m pretty certain most of you thought I couldn’t pull it off. “How can that crazy broad possibly come out with three books in one month?” you might have asked. Hopefully you didn’t answer yourself. If you did, you may want to seek some counseling.

I have to say, there was a point last week when I realized the month was more than half over – and I got a little nervous that I was not going to be able to meet Ms. Laurie Boris’s double-dog-dare to produce three books during November 2012. I’m a ridiculously competitive person, and the thought of not being able to get those three books done instilled near-panic in me. Sure, everyone else would have said, “You got two books published, that’s awesome!” But that’s not good enough. Not for me. END_OF_DOCUMENT_TOKEN_TO_BE_REPLACED

I have only been to one writer’s conference. It was a small one in Auckland, New Zealand run by the Romance Writer’s Guild. So yes, there were a lot of Mills and Boons authors there and yes, I possibly could have found one that was a slightly better fit for me, but all my books have a heavy romantic element and it was in town, so I figured I should give it a shot.

Was it worth it? END_OF_DOCUMENT_TOKEN_TO_BE_REPLACED