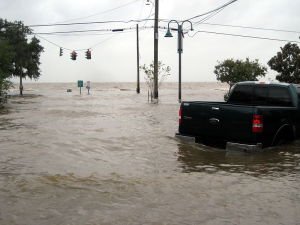 By the time you read this, it may be irrelevant. I’m writing to you on Monday, home from work due to the expected wallop of Hurricane Sandy on our forewarned-but-still-most-likely-unprotected heads, and hoping that I can finish this and send it off before the power inevitably goes out.

But maybe it won’t be irrelevant. The weather forecasters are saying that people in the path of the storm should be ready to be without power for up to a week. With NaNoWriMo starting on November 1, a week without power could be a very bad thing right now.

And bad weather happens all the time. Well, maybe not if you live someplace nice. But even paradise gets rain, wind, and the occasional freak hailstorm. Our job as writers is to capitalize on that inevitability.

Here, then, are some tips for weathering whatever storm Mother Nature sees fit to dump on you:

Prepare for it. Stock up ahead of time on candles, flashlight batteries, propane for the lantern (make sure it’s properly vented!), notebooks, pens, and your favorite libation.

When the power goes out, rejoice. Stores are closed; most modern entertainment sources (for example: TV, Facebook, Angry Birds) require juice. People all around you will be whining that there’s nothing to do. But you, lucky writer, can write, whether the lights are on or not. You might have to write longhand, but it can be done. After all, people were writing books long before there were computers.

Make full use of the electronic-distraction-free time. You can get a lot of writing done if the next episode of your favorite show isn’t calling you away.

Use “I’m writing” to your advantage. If the kids are bored, the dog needs walking, or the significant other is after you to help clean up the mess the storm left in its wake…well…you’re busy writing, right? (Okay, I’ll grant you – that’s rotten. But keep it in your arsenal, just in case. Who knows how long you’ll be housebound after the storm?)

Use the weather as fodder for your work in progress. Stuck for the next plot twist? How about a hurricane? If your book is set miles from any coastal area, stick in a blizzard, or a tornado, or even just a really bad thunderstorm. And don’t forget the tried-and-true device of having unsettled weather match the unsettled emotions your main character is feeling.

I’m sure I could come up with a few more ideas, but I think the lights just flickered, so I’m going to wrap this up now. Just remember, the sun will come out again eventually. You’ll have to type in all those handwritten pages then, but now is not the time to focus on that.

7 thoughts on “Making Hay Out of a Hurricane”