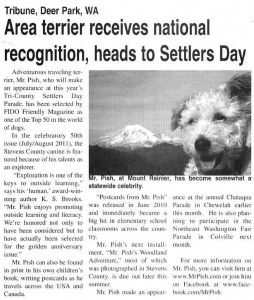 Two weeks ago we ran a tutorial on press releases. If you missed that, you can read it here. That article caused quite a stir, and a number of people responded with “Oh, man! I wish I’d had this information when my book came out!” But a new book release is not the only thing worthy of the local news. There are other ways and reasons to get press which often go overlooked. (One way that tends to get overlooked is sending your news to radio and television stations. Make sure to include them, too!) Here are a few reasons to generate a news release:

#1 – New Book Announcements. We know this one already.

#2 – Events. You should write a news release each time you do an event. If you have a lot of upcoming events close together, list them in one release. Let’s say you live in Spokane, Washington and you’re traveling to Chico, California for an event – make sure to disseminate the release to both places. And, don’t forget, if you lived other places before Spokane, be certain to send it to the media in those areas as well. This one can be a little tricky – don’t wait until the last minute to send to the Chico media. Many publications, especially arts-related ones, are weekly and even monthly, so check well in advance to see what their deadlines are. Lots of websites and papers also have calendar listings. Make sure to hit as many of those as you can for  Chico. In fact, there may be online calendars managed by the Chamber of Commerce, the library, and other community-related organizations. Get yourself on those. For all other locations, you can actually wait until after the event to send in the news about your big success – and make sure to include photos. They do tend to love pictures. (But not as attachments.)

#3 – Awards. If you won an award, let everyone know! Don’t forget to update your website(s)/blog(s) and wherever else you appear.

#4 – Milestone. Sign a contract with a movie house? Sell international publication rights? Get featured in a magazine? Local Guy/Girl Does Good is always a great headline and a feel-good story. If you’ve moved away from your home state and you’re going to be in a parade in the new place – make sure to write home about that. Because back in Boston, they have no idea that in East Nowhere, Washington, the Annual Founders Day Parade is comprised of 3 fire engines, some riding lawnmowers, a few horses, and you.

#5 – Charitable Causes. Donating a portion of your profits to a cause? Giving books away for a fundraiser? These types of things should not be overlooked. Always make sure to get permission from a charity before using their logo – many of the larger foundations require a large donation for the right to use their images. Contacting them is always a good idea – sometimes you can get them to give you a quote, share their media list, or coordinate a joint news release. (Don’t forget to ask them to feature your book in their online bookstore!)

#6 – Lists/Marketing Surveys. Marketing gurus will often suggest that people and companies should issue surveys, then publish and publicize the results. Supposedly this type of “research” is considered valuable. Lists are also a good way to generate widespread interest. This, unfortunately, is somewhere I’ve probably fallen down a bit. Mr. Pish has a huge list of Mr. Pish Approved Locations here – and I think that’s a pretty good reason to issue releases to let those areas know they are now in an exclusive “club.” People want to read about it when things, places, or people they’re proud of receive recognition. So why not make a list, then let them know about it?

Now, everything listed above is press generated by YOU. If you want to get exposure from a different angle, try HARO. That’s Help A Reporter Out. This is a bit of work, but if you’re diligent and quick to respond, you will get some press exposure. A couple of weeks ago I was interviewed by a BBC reporter. It wasn’t about writing, but my name and the fact I am an author will be mentioned. If you want to know more about HARO – you can read my tutorial here.

So, if you missed pressing the release of your novel(s), don’t sweat it. Be creative, and you’ll come up with some kind of excuse…er, I mean, reason to share news with the press. Can you come up with any other reasons for issuing a news release? Let us know below in comments.