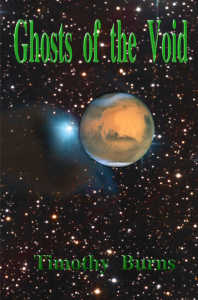 Today we have a sneak peek from Ghosts of the Void, the science fiction novel by author Timothy Burns.

Ghosts of the Void begins in the relatively-near future, painting a picture of an inhabited Mars and the attitudes and feelings of a population that has to depend on one another for survival in their domed cities. When things start going horribly wrong for no apparent reason, it is up to a small group of friends to discover what is causing the problems and then do what they have to to set things right, even if this spells the end for an entire civilization.

Here is an excerpt from Ghosts of the Void…

“Ain’t no such t’ing as haints. Least ways not on Mars. Maybe back home, but no way no how dey be here.” Having been raised on gumbo and ghost stories, Bo had to allow for the possibility of hauntings in the Old South, no matter how staunch his disbelief in anything else supernatural.

“Not no optical illusion, neither. I know what I seen. Can’t no computer tell me I didn’t.”

Disgusted with himself and impatiently waiting for the slow-moving tide of whatever it was that made the rocks shoot off sparks to finally pass by the mroom colony so he could safely harvest it, he couldn’t make himself stop replaying in his mind what he had seen Outside.

In the first instant that he had realized he was no longer alone, seeing something out of the corner of his eye where nothing had been a moment before, his first fleeting thought was that he had caught another prospector trying to sneak up on him with something dastardly in mind. After all, who or what else could possibly be out there with him but another mroom hunter, and there was only one reason he wouldn’t announce himself.

That thought lasted but a split-second, though, before it was replaced by a much more awful sensation. As he continued to turn he was overcome by an incredible, overwhelming feeling of dread and revulsion even as his stunned mind struggled to make sense of what it was being presented with.

It’s head looked like a redlight user’s worst trip come to life. One eye was an elongated oval protruding up and out a handspan or more, the other a mere pinprick in the lumpy, crawling, rippling lopsided face. A lipless mouth opened on an infinitely-deep unlit void, while its hair was a vague suggestion of something ephemeral and unfocused.

The body below this hideous parody was just as grotesque. Stick-thin chest, grossly disproportionate and oddly-muscled arms. A single, double-width leg trailed off into nothingness like an unfinished thought.

Everything about the apparition gave the appearance of being something somehow drawn on the underlying fabric of reality by a seriously warped mind with very little sense of what a human being even was. Despite his firm belief in the non-existence of anything he considered made-up, in that moment the terrified prospector seriously considered considering himself a believer.

Just as quickly, he suddenly became convinced that it was indeed something real and not some ghost or hallucination when it reached a splay-fingered hand towards him. Its touch left nothing to the imagination. His shoulder would bear the bruise for weeks to come. It had been like getting in the way of some hugely massive piece of machinery moving in zero-g, slow but oh-so-unstoppable.