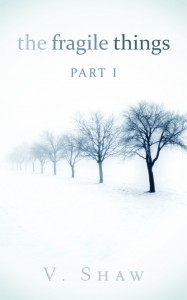 Just in time for Halloween, we have a sneak peek from The Fragile Things (Part I), the horror novel by V. Shaw.

At seventeen, Jennifer should have the world at her feet. Instead, she’s an ex-heroin addict living with her boyfriend and former dealer. Shunned by her family, she dreams of something greater than she’s been given.

Ebony has moved in across the street. She’s just lost the one person in her existence to cancer. She’s also a centuries-old vampire, struggling to cope with murderous outbursts and the desire to be something more.

When these two lost souls meet, an unusual friendship begins. The Fragile Things is a horror serial about friendship, hope, survival, and what it truly means to be human.

The Fragile Things (Part I)  is available through Amazon.com and Amazon UK.

Here is an excerpt from The Fragile Things (Part I)…

As the earthworm emerges from her ear canal, following the blood-slick trail down her cheek, the girl can’t help wishing she’d listened to family.

Her body is the feverish rush of tempered steel plunged into icy waters. She doesn’t know how long she’s been trapped down here for. She bases her concept of time upon the alignment of the sun, the moon. Her eyelids are heavy and even if she could open them, she’d see nothing. The smell of dirt, rich and damp, fills her nostrils. She struggles, but it’s in vain. The earth is cocoon-tight around her. She pauses and then alarm shoots through her as swiftly as an arrow.

Dirt hits the back of her throat as she gasps suddenly, clogging up her windpipe and making her cough and splutter.

She has to get out of here.

Her left hand is above her head. She squirms, hoping she’s not got too far to move, hoping beyond hope that any moment now her fingers are going to crack through the surface, feeling the sharp chill of winter. But all she finds is stone. Cold, hard and infallible as death. If she could scream, she would.

Giving up has never been in her nature. With a grunt, she fights through the dirt, moving her right hand to meet the left. The rock is not directly above her. She can feel its rough edges now, the springy clumps of frost-crusted moss. With renewed optimism, she finds purchase and pulls herself free.

This is how she emerges—not with a war-torn scream, but a whimper, sprawling across the ground, waiting for the world to sink back into place around her, trembling and breathless.

Because she’s not breathing at all.

She presses a palm against her chest, knowing that her heart should be thudding in her ears, but she feels nothing. Maybe she’s dead? Maybe she’s pushed herself out of the hole only to find herself in the afterlife? But she doesn’t believe that, either—despite what family says, she had no place for religion. Death is the end of all things.

The sky is a living tapestry rolled out above her, and she remembers. This isn’t the afterlife. There’s a white fawn lying on the ground, its throat torn and its innards spewed everywhere. She turns around, recognising the path and the trees and the Great Rock by her side. The world is the same, but something is undeniably different about it all. The thought cuts into her mind with the precision of a knife:

The cripple. He did this.

Family lurks in the horizon, beyond the trees and before the mountains. She has to get back there, has to warn them. She finds her bow next to the smouldering remains of campfire. Her arrows have been reduced to splinters, the arrowheads peeking between the charred bits of wood. But the knife remains. The knife remains and that’s all she needs.

One thought on “Sneak Peek: The Fragile Things (Part I)”