But the ones who are still dead-set against it? You got it. The agents, the very ones who are being marginalized by this new tete-a-tete. After all, if you can put your book out there, gather a following and possibly, eventually, get picked up by a traditional publisher, who needs an agent? 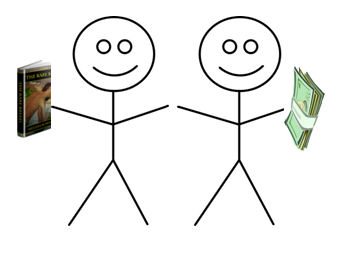 I had one once, through sheer serendipity. Eons ago, back in the middle Paleolithic, I used to write my books in longhand on blue line. By the time I got done with one, I was pretty well sick of it and I had no interest in typing it up (on a typewriter [electric, not manual. It wasn’t THAT far back!]). Luckily my mom was a good typist and volunteered to do it for me, so I shipped my 15-pound manuscript off to her.

Unbeknownst to me, she not only typed up my book but liked it well enough to shop it around to a literary agent she knew. He liked it, as well, and agreed to represent me.

Initially things went well. He dutifully made copies of my ms and mailed it out to various publishers. He would let me know when he received a response of note, usually a rejection letter with nice encouragement, i.e., “Doesn’t fit our program at the current time, but has promise and we hope you will keep us in mind on future projects,” or something of that nature. As he was pitching the first book, I was writing the second. When he notified me that he had negotiated a contract for the first book, I was, understandably, over the moon.

Unfortunately my book took a little longer to make it through the process to publication than it should have. The company that originally bought my book went under; it was bought out by another. In the aftermath, the second company had to go through the backlog of contracts and decide which ones it wanted to keep and which ones it didn’t. I was lucky; it kept mine.

But it took four years before the book came out. In the meantime, of course, I was writing and figured my agent was earning his keep by sending out my second book. It was a jolt when I got a letter from my publisher asking if I had any other books they could see. Well, yes, of course I have other books. I promptly sent them my second book. They liked it and bought it. So now I’m thinking: what the heck is my agent doing?

Come to find out he was busy looking for properties for movie projects. He told me to quit writing westerns (both my first two books were western romances) because they didn’t translate well to the big screen. He had many ideas for what I should have been doing, but no interest in promoting what I was doing.

Needless to say, it was time to go our separate ways. That was back in, um, 1987. Since then, I’ve published 9 other books by various means, both traditional publishing and self-publishing. And I haven’t had an agent for any of them.

Do you need an agent? Only you can answer that question. The answer for me has been a resounding NO.