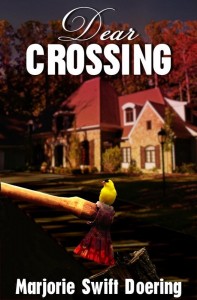 Ray Schiller’s personal demons are sucking him down like quicksand, but when the wife of a prominent Minneapolis businessman is the victim of a grisly murder in the couple’s lakeside summer home, Ray follows the trail of evidence to the Twin Cities where he joins forces with homicide detective Dick Waverly. With his own marriage on the verge of disintegration, Ray works to uncover the widower’s carefully guarded personal life. The executive’s plan to take over his father-in-law’s corporation depends on preventing Ray from succeeding.

As the tangled web of secrets and lies begins to unravel, the case is turned on its head as ambition, power, love and hate result in lethal consequences. When an unthinkable incident makes Ray the subject of a harrowing Internal Affairs investigation, he soon learns the “devil” is in the details.

Dear Crossing is available from Amazon.

Marjorie Swift Doering enjoys writing in various genres. Currently, her focus is on the editing of Shadow Tag, the second in her series of murder mysteries featuring Detective Ray Schiller. In 2005, her first one-act play was produced and performed by Darknight Theatrical Productions in Chicago, Illinois. Omega Publications, in 2009, published a number of her short stories in an anthology titled Mosaic, A Collection of Short Stories. In 2010, another of her short stories was published in Red Cedar, The University of Wisconsin Barron County’s journal of arts and literature.

She and her husband, Denny, live in beautiful northwestern Wisconsin with their Springer spaniel and three crazy but lovable cats.