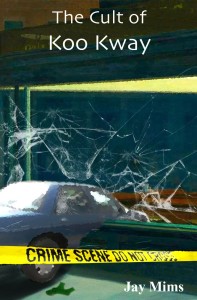 The Cult of Koo Kway
by Jay Mims

Dan, Abbey, and Doc are all back and so is trouble in this second novel by cozy mystery author, Jay Mims.

Just as soon as Dan takes the case, Doc shows up poisoned on Dan’s doorstep and the only clue is a reference to an old movie, The Cult of Koo Kway.

This book is available from Amazon, Barnes and Noble and Smashwords. Be sure to check out Jay’s blog as well. Here is an excerpt from The Cult of Koo Kway, by Jay Mims:

Waking up, Dan Landis realized two things: he was handcuffed and his head hurt. He hated headaches. And someone was cooking. It smelled like stir fry. Stir fry and handcuffs meant one person. He opened his eyes, turning his head toward the smell. The plastic wrapped couch squeaked beneath him.

“You’re not Bernie,” he told the woman. She was sitting in a white chair; it looked like something you’d sit in at an outdoor wedding. Or a fancy café. She looked upset. Dan couldn’t blame her. After all, she was his client.

“Who’s Bernie?” she wrung her hands, her perfectly tanned skin turning white. The white contrasted against the hot red of her nails. The color matched her dress.

“A friend,” Dan said, letting the cool plastic resting against his cheek sooth his skin.

“Your boyfriend?” the woman looked over her shoulder. There was a big digital clock hanging over the massive TV. Dan checked the time. It was a bit too early in the morning for stir fry.

“No,” Dan tried to hide the fact that his hands were reaching for his wallet. He kept a handcuff key there, just in case. Except his wallet was gone. He’d left it in the car. Of course he had. “Bernie’s a girl. She’s not my girlfriend. She’s…it’s complicated.”

“Oh,” the woman exhaled, her voice a cocktail of relief and frustration. Dan squirmed, moving his legs around, trying to gracefully slip off the couch. The carpet felt good against his socked feet. Which made him realize something important.

“Right.” He remembered now. She’d made him take off his shoes. His black socks blended nicely with the maroon carpet. Pushing against the couch with his legs, leaning forward, Dan let momentum get him vertical. He breathed deep, stretching his chest out, and exhaled rolling his head from side to side.

The movement made the pounding in his head worse.

“You wouldn’t happen to have a key to these cuffs, would you?” Dan asked, aiming for nonchalant. His hands were tingling, he could feel his temper rising, and his wrists itched. Exploring with one finger, he felt fuzzy soft felt. Fuzzy handcuffs. Bet they’re pink, he thought.

“It’s in the kitchen,” the woman said, refusing to look him in the eyes. Her voice was choked, light glinting off the tracks of tears running down her face. She stared at her feet, still wringing her hands.

He noted she was twisting her wedding band. The whole thing was starting to get to him. He sat back down.

“Lena,” Dan said, kicking himself for letting her affect him this way. Stupid. It was always the tears. They were his kryptonite. “You didn’t have to handcuff me.”

“You offered to make me breakfast in bed,” she said, still not looking at him.

“I can take no for an answer. I’m a gentleman.”

That earned him a sly look. Brown eyes stared at him, bloodshot and tear filled. For the briefest second, the ghost of a smile haunted her face.

“I’m a married woman,” she choked.

“Yes you are. A beautiful married woman,” he said. Just my type, he didn’t add. “And if you’ll bring me the key, I’ll just be on my merry way.”

“Really? Because the last thing I remember, before everything went black, is seeing a pan speeding toward my head.”