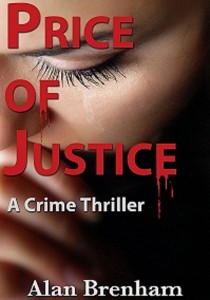 Today, we feature a sneak peek of the thriller/police procedural novel by Alan Brenham, Price of Justice.

Price of Justice is a story about loss, revenge and second chances. This thriller follows a widowed police detective, Jason Scarsdale who, while trying to raise a young daughter while solving two murders, unwittingly befriends a grieving mother secretly bent on murderous revenge, drawing him into a web of malice that teaches him the value of breaking the rules. Then, when he thought things couldn’t get any worse, they did.

Price of Justice is available through Amazon.com and all Amazon channels.

Here is an excerpt from Price of Justice:

When I came out of the restroom, the Crowells were gone, perhaps back in the courtroom. I saw Lasiter standing outside the courthouse, smoking a cigarette. I wondered if he planned to abscond. Surely he gave it serious thought.

Despite my disgust with cigarette smoke and perverts, my curiosity piqued me into strolling toward him. I wanted a closer look. Maybe he’d sense the incredible hatred I felt for him.

Lasiter appeared sullen with his eyes staring blankly into the distance. I watched his hand move mechanically – raising the cigarette to his lips and back down. The smoke spewing from his nose disgusted me. But then so did he.

“You’re that child-killing defendant, aren’t you?” Words weren’t strong enough a weapon to use on him, but they were the only weapon I had at the moment. If I had a gun or a knife, I would have used it right there. He had no right to live, not after what he did to Amy.

He looked at me with sad puppy-dog eyes as he chewed on his lower lip. He nodded before answering in a subdued tone. “I’m the defendant. Yes, ma’am. But I didn’t kill anyone.” His attorney came out the door and moved between Lasiter and me.

“Scott, come over here,” Welsh said. He glanced at me, giving me the once over from head to toe.

I flashed one of those super quick smiles, the ones which show a very minimal degree of friendliness. I lingered nearby, wanting to hear what they discussed.

“None of the state’s eyewitnesses identified you as the man on Fritz Hughes Park Road,” Welsh said. “Do you have any idea who used your car to dump the body?”

“No. If I did, I woulda told the cops.” He blew out more smoke. “What do you think the jury will do?”

“No one really knows but I like your chances.” He put his arm around Lasiter. “C’mon. Let’s go back inside.”

I seethed. Chances? Give me a knife and five minutes. I’ll show you what your chances are, Lasiter.

Lasiter crushed the cigarette beneath his shiny black shoe. Turning, they started for the doors. Then Lasiter stopped and looked back at me with a tight-lipped smile. “Ma’am.” He held the door open as a gesture, inviting me to precede him back inside.

“No,” I said in the coldest tone I could muster. If it had been anybody else, I’d have accepted the offer, but a pervert was the last person I wanted walking behind me.

I watched him pass through the door toward the courtroom. His head hung down, and his shoulders slumped as he stuffed his hands into his pants’ pockets. He shuffled his gait. His steps seemed weak and tottering like those of a condemned man. In my mind, he already was one. But if the system didn’t work this time, if the jury let him go, I’d kill him myself.

One thought on “Sneak Peek: Price of Justice”