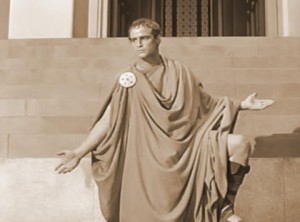 Got your first author gig? Giving a speech? That first speech or book signing event can be pretty daunting. *Julius Caesar may have been a great statesman and a gifted orator but we are merely authors. We are not practised in such verbal skills. We rarely employ rhetorical irony to win over our listeners (actually, I take that bit back. Some of the IU team are very gifted in that direction), or are blessed with oratory prowess.

My first speech as an author was to a book club. It took place in an intimidating, sprawling house where the sitting room was the size of my entire bungalow. It consisted of formidable and rather clever ladies who were semi-reluctant to let an upstart like me come and talk to them. I’d prepared what I considered to be a cheerful and upbeat talk.

It didn’t go to plan. Through no fault of my own I turned up late, hot and bothered, to face a crowd of grumpy women who had been sitting around for over half an hour. They had consumed all the fruit cake and coffee assigned for a half-time interval. Now they wanted some entertainment. The problem was, they were a tough crowd, tougher than usual, because they had been kept waiting.

People think if you write humour you are a comic – well, I’m not. I’m a writer. Okay, I can be funny, especially if I have had a glass or two of wine, but in this situation I had been invited to talk about publishing. Not much to joke about there, then. Still, humour is always welcome, no matter what genre you write, so I always try to start off on a positive note.

I attempted to break the ice with a few feeble jokes. (“Thank you for inviting me to your Book Club. It seems far more impressive than my own. My local book club only manages to read wine labels.”) They met with a stony silence. I smiled my winning smile. No response. Undeterred, I launched into why I wrote and what my novels were about. Normally, people immediately associate with that. I’d tried it out several times in conversation with positive results. This time I was met with little but frosty glares and then I heard it…a soft snore. I gulped and continued. The rumbling became louder and gradually others could hear it.

“Well, this is a first. I know I can go on a bit but I haven’t actually made someone doze off within the first ten minutes before,” I announced. The ice shattered with a loud crack. Faces smiled and one or two chuckled. The culprit was discovered. It was a large hairy dog (belonging to the lady of the house) that had dozed off behind a settee. It was plain sailing thereon in and everyone had a jolly fine time. It must have been good because I was invited back and that second talk led to a further engagement – well, actually several engagements.

With each talk my confidence grows. I still spend all night the night before, wide awake, wondering if should add this bit or take out that comment. I try to follow Erma Bombeck’s philosophy. You hook them with something funny and leave them laughing. I always start with an anecdote, then get onto the serious stuff, throw in a few quick sharp humorous comments and end with another quip. 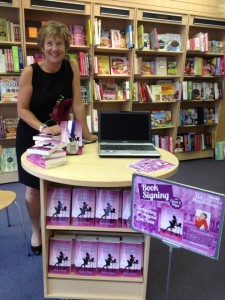 Earlier this year, I launched my latest novel at a well known local venue in my nearest town. The launch received considerable press attention. Leaflets were distributed into every home. Twitter was awash with tweets about the event. I had been interviewed on local radio and it had been promoted by all local newspapers. Even a free local magazine which goes into every house in the area had done a great feature on me, the novel and the launch. It was sure to draw many people.

I worried about my speech for days, no make that for weeks. I wrote it out, practised it, scribbled it out again and rewrote it yet again. I practised in front of a mirror and even videoed myself giving it, to ensure I looked natural.

The big day arrived. I packed up my boxes of books and made for the conference room which was all ready for me. The members of staff were excited about the event and impressed with all the publicity I had secured for it and the venue. Tea, coffee and biscuits had been laid on for the masses.

I got ready in the toilet. Last minute preparation in front of the mirror included checking that there was no spinach stuck in my front teeth and that I hadn’t smeared mascara under my eyes. The clock struck ten and I made my grand entrance into a room of, wait for it, only five people. One of those was a friend who had come to support me, another was a young lady of about twenty who was way too young to even enjoy my book and the front row consisted of three older women. It was a disaster.

Nevertheless, I had promised an entertaining speech and so I attempted to give one. I didn’t let the fact that I’d be lucky to sell three copies of my book bother me.

There is a moral to this story. No matter how bleak things look, don’t give up. The young girl turned out to be a journalist who enjoyed the talk so much she told her editor. As a result I recently featured in a double page spread in a very glossy magazine. Also, one of the ladies in the front row was a member of the Women’s Institute and on the back of that talk I have been booked for several other much grander events.

*For clarification, the speech beginning “Friends, Romans, countrymen…” is from the funeral oration given by Mark Antony in the play Julius Caesar by Shakespeare. He didn’t use much humour in it but it is rich in rhetorical irony.

19 thoughts on ““Friends Romans, countrymen, lend me your ears…””