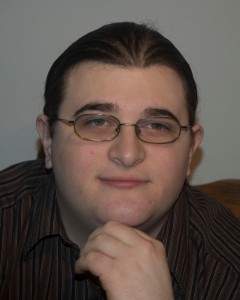 Some time ago I was approached by my mum, Carolyn Steele, who wanted my opinion for a blog post. She said it was about characters, what makes them flat or page-leapy, and how we feel about our creations. She had to stop me when I started to ramble about Stanislavski, and we decided there might be a post in how an actor’s method could benefit the fiction writer. I would like to share with you how my experience as an actor and playwright helps my development of prose characters.

So you’ve got a character that comes off a little flat, a little boring—he’s just zis guy you know? I’ve heard all sorts of tips for giving characters a little more life: the most common being physical or personality quirks, and rich backgrounds that shape their development. While these are undoubtedly useful tools for both the writer and the actor, I consider them to be traps. These should be supplementary tools, second to the arguably most important influence on a character’s action: Dreams of the future.

This is where we get to Stanislavski. There’s too much in this system for a single post, so I’m going to focus on the difference between an activity and an action. An action is an activity with an objective. An objective is driven by a desire, and desire is invoked by dreams of the future. An actor according to Stanislavski, when choosing how and where to move on stage, must in every moment be aware of these four things.

• The super-objective, a goal that leads them through the whole play, which invokes

• A through-action, a single intention and desire for the current scene, which informs

• An action, which is a step or strategy used to help achieve their desire, which is driven by

• An objective, the immediate impulse that turns simple activities into actions.

All of this can be driven by one single, simple goal. As long as the actor has an idea of what their character wants in the future, they can justify every movement they make and word they speak. This process is just as important as constructing the past. I don’t believe that the past ever drives action, it only influences a character’s future aspirations. To be clear, I’m not saying the past is unimportant. Emotional knee-jerk reactions, avoidance behaviour, and a number of other elements of character depend on their history. But the past governs reactions, not actions. Past events can be helpful in shaping a character’s dreams, but the dreams themselves drive action.

Let’s go through the process of turning an activity into an action. We’ve got a character who is walking out of a room after an argument. That’s an activity, because ‘to leave’ is a weak objective, unless there’s an obstacle to overcome in order to do so, be it internal or environmental. Before we get into the details of the scene we ask, what are this character’s dreams? Maybe we decide she’s in love, and wants her affection returned. Now narrow it down, what does she want at the end of the scene? She’s arguing with the object of her love, but all she wants to do is kiss him. That leads to the strategy she uses to get what she wants, the action of walking out of the door. The action is driven by her objective, which is to get him to chase after her. By adding longing to anger we have added complexity to the character and depth to the argument.

I have worked with directors who make a habit of stopping actors mid scene during rehearsal. They tell us to freeze in place, and they ask us questions. “What are you thinking? What are you doing? Why are you doing it? What’s your goal?” Actors are limited by the words the playwright has written, and this process is designed to work within those constraints. But it’s also a powerful tool for authors. Give the character a dream. Then be a director. For every action they take ask them, “Why? What do you want, right now? Are you getting what you want? If not, what are you doing about it?”

In this way you will discover actions that don’t fit your character, and perhaps gain new inspiration about their place in your narrative. Characters who are driven, who are desperately trying to influence their own fate and the world around them, they are very human.

Ben Steele has been in love with the theatre all his life. He began acting at the age of six and never quite stopped, but since moving from England to Canada and attending York University, he has branched out as a playwright and director. He also works as a freelance sound and lighting technician for local theatres in his home town of Kitchener. More recently, he started writing fiction and after having a short story published in an anthology, decided it was time to take a crack at a novel. That project is still in its early stages, but he’s very excited.  Find out more at benjaminsteele.ca.

20 thoughts on “What Can Theatre Do For You?”