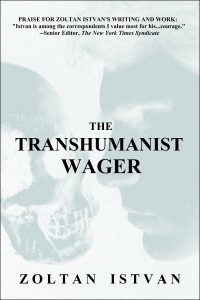 Today we have a sneak peek from The Transhumanist Wager, the visionary fiction novel by Zoltan Istvan.

The Transhumanist Wager is a seminal statement of our times. Set in the present day, the novel tells the story of transhumanist Jethro Knights and his unwavering quest for immortality via science and technology. Fighting against him are fanatical religious groups, economically depressed governments, and mystic Zoe Bach: a dazzling trauma surgeon and the love of his life, whose belief in spirituality and the afterlife is absolute.

Here is an excerpt from The Transhumanist Wager…

His life was about to end. A seventy-foot wall of shifting blue with a million tons of water was veering down on him. It was the largest wave of the hurricane—what scientists and sea captains call a rogue. He watched the wave steepen, the wind lines near the lip combing the sky, painting an arch of dark rainbow hues far above his yacht’s mast. He calculated how much time he had left before the wave consumed him. Maybe ten seconds, he thought, aghast. His pupils tightened.

Around him, the smoky evening sky was burying the day. Frosty white spray tore off the water and exploded with the force of cannoned sandpaper. The 24-year-old sailor felt its sting all over his naked body. He wore only a yellow safety harness, which was attached to a rope wrapped around a cleat on the mast. It was a last resort to keep him tied to his yacht in case the ocean swept him overboard.

On his face was nine months of Viking-red beard growth. In the soaring wind, it tangled with his salty blond locks. His tall sun-scorched body swung in the motion, hanging between two taut muscular arms. Those arms bore vein-ripped hands, which tightened on the yacht’s twisting wire stanchions. The stanchions stretched through the air like violin strings, bound from the swaying steel island underneath him to the towering mast above.

The trough of those mountainous, cobalt-blue swells repeatedly charged and swooned, swallowing his boat, then pushing it out, then swallowing it again. Everything was alive, caught in movement, caught in tension—either growing in power or waiting for demise.

Forty-eight hours before, two Southern Hemisphere storms, an out-of-season tropical depression and a cold front’s low-pressure system, collided 500 miles north of New Zealand. They merged into a superstorm. Last night, the hurricane—named Talupa, or “wind of death,” in ancient Samoan dialect—graduated from Category 4 to Category 5. Islanders in the South Pacific, from Tahiti to the Solomon Islands, were warned to prepare for the century’s worst storm. Winds were forecast to gust over 200 miles per hour.

Jethro’s thirty-four-foot steel sloop, Contender, was slugging north in the tempest’s epicenter. His main and jib sails were reefed to the size of napkins. For the past twelve hours he pushed towards the equator, trying to avoid the hurricane’s eye. But the storm grew too large, too quickly. Escape was now impossible. The 1000-mile-wide hurricane caught Contender in its left rear quadrant—known to sailors as the “kill-zone” because it blows stronger than the other quarters; seas were the most chaotic here. Ships of any size and quality rarely survived winds of that speed in the open ocean.

Until now, Jethro’s confidence had waned little. He believed his boat was all but indestructible. His yacht was designed with the same ultimate resolution he held for himself in life: survival at any cost. Three years ago, just before graduating from college, Jethro meticulously welded Contender together for five months in New York City. He knew every millimeter of the sailing vessel, every point of stress, every calculus and geometric equation used to create it. The boat was painstakingly constructed to withstand the greatest of pressures, in the worst of circumstances, while maintaining the maximum integrity of its purpose.