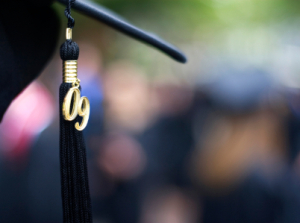 I work a few days a week at a nearby college, mainly plucking typos from website copy and asking people to use consistent written language. Choose the futile metaphor of your choice (affixing gelatin to trees, managing herds of cats) and yeah, sometimes it feels like I do a bit of that, too. It’s also made me ridiculously aware of the academic terminology errors in the novels that I read. For instance:

Students attending a community college (sometimes called junior college) are pursuing a two-year degree. This is an associate degree. No “s” on the end, no apostrophe, and no caps unless you’re spelling out the entire degree for a formal usage, say, on a diploma or in an academic journal:

If our intrepid heroine intends to transfer to a four-year school from her community college, or if she mortgages her soul to start her education at a four-year-college in the first place, she can pursue a bachelor’s degree. Yes, that one has an apostrophe and an “s.” Again, if spelled out, this is bachelor of arts or bachelor of science.

Moving on? You go, Suzie. She’ll be pursuing a master’s degree or a master of (whatever.) And a doctorate is written as PhD. Although this educated soul is entitled to be called “Doctor,” the degree and the honorary are not used together. So “Dr. Arnold Katydid, PhD” is incorrect.

Titles like professor, dean, assistant professor, associate professor, and president take the same rules as titles in other institutions. Capitalize if using before a person’s name. If it’s used after the name (particularly after a “the”) it is lower case. Examples:

Professor Katydid did not have his contract renewed because of his questionable research methodology on Madagascar hissing cockroaches.

Arnold Katydid, PhD., the professor being investigated by Greenpeace, had no comment. Neither did Suzie, a graduate student assisting him.

The dean of administration wasn’t at the disciplinary meeting. However, President Mayfly barely registered his absence.

Now is the Semester of My Discontent

Spring semester, fall semester, summer semester: when used generically, seasons are normally lower-case. If you are referring to a specific semester, it’s normally capitalized: Suzie checked the online catalog and discovered that Geology 101 will be offered in Spring 2014. (Note: no comma after spring.)

In general, class names (geology, physics, anthropology) are not usually capitalized with the exception of languages, like English or French classes. Specific class names (for example, Trends in Advertising Copywriting) are capitalized. The capitalization of program or department names can be dicey. They can be capitalized if part of someone’s title: Professor Dragonfly, chair of the Department of Antiquities. Although, the departmental rule normally follows the title rule: According to Suzie’s diploma, she has an Associate in Business Administration, but she studied business administration.

This one trips a lot of people up. But you’ll see the pattern if you remember your high school Latin.

Alumnus = One male graduate.
Alumna = One female graduate.
Alumni = Multiple graduates, male or female.
Alumnae = Plural female graduates. Often seen in traditionally all-female colleges. Vassar, for example, even though it has been admitting male students since the 1970s, has a building called “Alumnae House” on its campus. The name is only a nod to Vassar’s all-female heritage, however, because the actual department that handles alumni affairs is called the Alumnae/Alumni Office.

Okay, got all that? Now when your college-age characters are hanging out in the quad with a few alumni while talking about sociology, Communications 101, and French literature, you’ll get it right.

(Note: Examples are based on US-English usage, Chicago Manual of Style. The AP Stylebook, used mainly for newspapers, does things a little differently. If you are writing for a particular organization, check if it has a style guide of choice.)

14 thoughts on “Getting It Right: It’s Academic”