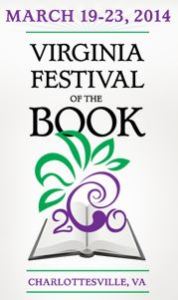 At the Virginia Festival of the Book, this past March 23rd, several authors and experts talked about the best ways to build platform, as well as some specific marketing strategies. Last time we looked at platform building. Now, let’s look at marketing.

First and foremost, when it comes to marketing, think about trying to reach your reader. This is something that indie authors can do particularly well. Jane Friedman, former Writers Digest publisher who now teaches digital publishing at the University of Virginia, noted that traditional publishers have failed in gathering information about readers. “They’re selling to bookstores, so they don’t have these great email lists or insights into the market,” Friedman said. Authors can look more broadly at readers and try to reach them. Email is an especially effective way.

“Email has proven to be a really powerful tool,” Friedman said. “Publishers don’t have a lot of direct consumer data. They can’t say to the people who bought the book before, that a new book is out by that author. That’s why its important to have an email list. It is one of the most powerful investments an author can make in their career. It’s like putting money in the bank, every time you get someone signing up.” Jim DeVitt wrote a post about email newsletters last month.

Friedman said she’d seen writers with email newsletter frequencies vary: annually, quarterly, bimonthly and monthly. She felt bimonthly or monthly worked best, and if you only go annually, your reader is likely to “forget they subscribed and mark you as spam.”

In addition to email lists, Gigi Amateau, author of several children’s books, says authors need to find their community of readers. “Every book intersects with its own community. Think about the story you’ve written and who might be interested in it,” Amateau said, noting she went to a different audience from her norm with her book about horses. “Kids in 4-H are into them. It is a place where I can talk to people about it, and they’re interested in it.”

If there is an association or a group that might be affiliated with the subject matter of your book, go there. Try to engage with that community and get word of your book out.

Author Maud Casey has a book is based on the story of a 19th century man who suffered numerous fugue states where he woke up places and couldn’t remember how he got there. During research for this book, Casey heard about a scientist studying memory and has become involved in a community of neurologists who are now interested in and discussing her book.

Two conference speakers reminded people that getting journalists interested in publicizing your story is helpful. While it may sound like a daunting task, it is perfectly possible, says Denise Kiernan, author of the book Girls of the Atomic City.

“Think like a journalist,” Kiernan said. “They are looking for you as much as you are looking for them. It’s easy for you to think, I want to be in the magazine so I’m in a position of weakness. But as a journalist, you have to fill your newspaper, you have to fill that blog. The author has to ask, what does that person need? If you give them the angle they need, they are thrilled to publicize your book.”

Kiernan appeared on the Daily Show with Jon Stewart to talk about her book. She readily admits it was a combination of pitching and luck. Her pitch ended up being routed to a producer who liked the angle, and that producer pitched it to Stewart, who read the book and liked it. If either the producer or Stewart hadn’t liked it, the appearance wouldn’t have happened. But, you’ll never find out, Kiernan notes, if you don’t make the pitch.

Sharyn Rosenblum, a vice president at William Morrow who spent many years as an in-house publicist, said one thing that can help sell the pitch is the back story. “You want to develop the story behind the book,” Rosenblum said. “If it’s a novel it could be what inspired you to write it. If it’s a nonfiction narrative, it’s what evidence you have to create it, there are so many pitches out there. You have to cut through that noise. I know we talk about platform, but you have to find a way so your voice comes out of the book and be an advocate for it.”

Ebook metadata, Friedman says, is also a key component to marketing your book. Friedman describes metadata as all the stuff you would see if you actually picked up a book in the bookstore, plus a little more. So, the cover, the book blurb, the sample pages and, on Amazon, keywords and categories. This metadata will flesh out the book for readers who are seeking out that information, so they can find it and purchase it. “Good metadata increases sales,” Friedman said. “I heard a talk from someone who specializes in this and they said, the biggest kiss of death for any book is to be categorized as fiction general.”

While free is controversial in the author community, Friedman recommended free as a marketing strategy. “For an unknown author, you need to make your book generally cheap or possibly free,” she said. “That’s how it works. Who plays Candy Crush? It’s free to start, but you have to pay 99 cent to go to the next level. You need to pay 99 cents if you’re going to get the hammer. The basic concept is loyalty comes first and you monetize later.” She noted that a popular and effective trend for series is to make the first one permanently free and charge a higher price for the remaining books in the series.

Friedman said authors should also create content (beside the book) that connects with their readers. “I call it thinking beyond the book,” Friedman said. “We have to think about content in ways that go beyond the book’s covers. So, there is no hard-and-fast rule. You don’t have to have a movie or a podcast, but you have to think about what things broaden the content. It’s really an act of your imagination. What would readers genuinely delight in if you created it?”

Finally, sticking around may be an author’s greatest marketing tool. “Authors have found a book’s profitability doesn’t stop after the first three months it is on sale,” Friedman said. “You’ll always have new people interested in going back to your backlist.”

[If you missed Part One about platform building, you can read it now.]