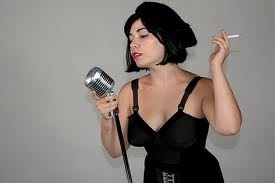 I majored in Creative Writing.  Not because I like writing – because I like Ferraris and fast women.  Majoring in Creative Writing in San Francisco was one of the smartest things I have ever done.  We drank wine during class.  We took lots of smoke breaks.  We were passionate and in love with writing and reading and the sheer bliss of it all.  I met a lot of great writers.  And I met some crappy ones, too.

I am going to make a huge generalization here.  That’s how I roll.  Most of the good writers I knew looked like your average citizen.  But there was always one or two kids…kids who actually wore berets and smoked those short foreign cigarettes.  Kids who wore scarves when it was warm.  Kids who carried notebooks everywhere and tried to sit in conspicuous spots and look like they had existential jock itch.  Man, they annoyed me.  And they never seemed to produce much actual writing.

There are a lot of people who think that writing is a glamorous proposition.  That writers are more sensitive, tortured, intuitive…blah, blah, blah.  Maybe we are, but that’s not why we do it.

One of the best writers I came across in my classes was a construction worker.  Man, he could write.  I’d show up for class, usually less than sober, dressed in my finest thrift store clothes.  I would sit next to this man, wearing jeans and an old Carhartt jacket.  We would get to work.  We were ready to go.  And there were others.  Shy girls who never talked but wrote brilliantly nuanced stories.  Jocks who wrote about their fathers with the kind of love that made you want to weep.  There were beautiful girls who wrote things that made you feel so sorry for them…and wonder what they saw when they looked in the mirror.  We didn’t wear berets.  We didn’t pretend to like certain writers just because you were supposed to.

Writers look pretty much like everyone else on the outside.  On the inside, sure, we’re a motley crew.  But you can pretty much guarantee if you look at someone and think that they look like a writer, they can’t write for crap.

It was like this when I played in bands, too.  The guys who looked like they should be rock stars always forgot the words.

I don’t think you should judge a book by its cover, but sometimes it is hard not to – especially when that “cover” is a carefully constructed collection of clichés that make you ashamed to tell people you are a writer.  Because there is one thing that is a prerequisite for being a writer.  It’s not a fancy French hat.  It’s not using a typewriter when computers are more convenient.  It’s not claiming you loved Ulysses when you really had no idea what the hell Joyce was talking about.  Writers write.  That’s it.  Pretty simple.  Beret not included.

JD Mader is the author of ‘Joe Café’ and a contributing author to Indies Unlimited. You can find more of JD’s writing at his blog www.jdmader.com.