Author David Antrobus says that what sets his style apart is his flagrant disregard for any sense of decorum or discipline whatsoever. He says his writing is more Capote than Cormac—more Houellebecq than Hemingway. He also went on to say it is the  literary equivalent of Casablanca-meets-Spinal Tap. Knowing David as I do, I’d have to agree with that assessment. I’m just not sure what it means.

By way of example, when I ask David where he finds his inspiration, he says,  “Life, movies, (comic) books, music, the internet, the inside of fortune cookies… and by that, I mean the actual inside of fortune cookies and not the little scrap of paper with the fortune on it. Hey, don’t look at me like that; they’re very smooth and almost always a pleasing shade of brown.” They are, aren’t they?

But it’s not all sunshine and lollipops and cold-medicine-induced hallucinations for David. He says the biggest challenge he faces as a writer is the very act of writing.  He says, “Actually sitting down to write. It’s hell. I have anxiety attacks. Sometimes that feeling of oppressive malevolence stays with me the whole time, others it dissipates, and for a change I’m being almost completely serious about that. It’s a weird kind of compulsive self-torment and I don’t think I’ll ever enjoy it other than in that queasy, masochistic way. The only way to deal with it is to either give up writing entirely and apply for that position at McDonald’s they reserve for aging and ‘special’ employees, or to push through. So far, it’s been the latter.” Allow me at this point to implore you to buy David’s book and any subsequent books he may write. Something must be done to prevent this man from handling and preparing food to be eaten by other human beings. That would just be wrong.

Though David has not used beta readers, he did once participate in a writers’ group in which the authors critiqued for each other in great depth, and says it was very interesting and helpful. One way or another, it is almost always helpful to get some fresh eyes on your writing.

When it comes to marketing his work, David struggles, as do most indie authors. He says,  “I don’t think what I do is exactly a ‘strategy,’ more a partially blind groping around in the dimly-lit social network swamp hoping against hope that something good will happen instead of something more like that scene in Stand By Me in which Gordie LaChance’s expression changes from mere disgust to a kind of hopeless, shuddery revulsion as he slowly forces himself to look inside his underpants.” Well. Who among us doesn’t know that feeling. I guess.

David has read many other indie authors including, K.S. Brooks, a couple of great short stories by Michael Edward (“Ed”) McNally, what he characterizes as “a razor sharp little crime novel (with heart!)” by JD Mader, and that’s just going back to late September. “There are some amazing writers out there in indie land, although it can be perplexing from a reader’s perspective, given the sheer numbers. And let’s be honest, as can happen in any revolutionary new wave (cf. UK punk in the late ‘70s), some of the criticism of independent writers has a kernel of truth. It can be plain bad, and often is,” he says.

David’s advice to aspiring writers? “Write every moment you get (he urged hypocritically). Listen to the experts on marketing, but don’t get sucked fully down the social media rabbit hole—you will only find yourself co-opted from the very reason you started writing in the first place; self expression. Because, rightly or wrongly, the endless self-promotion feeds directly into that other aspect of what motivates most writers: instant communication. This is both good and bad. Writers are, paradoxically, the most solitary communicators ever, and all of a sudden, both of those needs are met in one handy arena. After that, why write at all? It’s seductively dangerous. Oh, and I’d also say learn some chops. Develop the right muscles. Read a variety of authors and study what works and what doesn’t work. Imitate them, but only for a while. Good writing emerges from the combined chaos of life experience, attention to detail, intuition, rare inspiration, and the sheer perspiration it takes to carve something out of the inanimate block of marble a page on a computer screen might as well be. And never give up. Ever.” 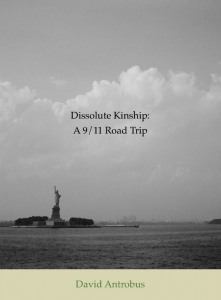 David’s book, Dissolute Kinship: A 9/11 Road Trip  recounts a solo car journey he took from the West Coast of Canada to New York City just over ten years ago.

This is what can happen when a personal story of trauma meets the collective horror of an apocalyptic, true-life event: in this case, 9/11. No doubt many people who intended visiting NYC at that time must have circled September 11, 2001 on their calendars (it’s just a random date, after all), but how many of them had a) been diagnosed with PTSD that same year, b) planned to drive from the Pacific Coast of Canada all the way across the continent, and c) were willing to do it alone? This fairly brief (approximately 6,000 words) account of one man’s solo journey is exquisitely personal yet undeniably universal in its haunting first-hand observations of the monumental changes wrought by the terrorist attacks. An acute loneliness is transformed into something which, if not outright beautiful, can surely pass as inspirational.

David reports the book has twelve reviews on Amazon (all 4s and 5s).  He says, “I am more impressed and even delighted by that handful of readers who respond to my work the way I’ve responded to some of my favourite writing in the past than I am by finding some elusive ‘formula’ for success or riches. I honestly believe, rightly or wrongly (and only time will provide an answer here), that if I continue to write what I believe in and only play the marketing game up to a necessary point, something of that passion and (dare I say it) integrity will be imparted to my work and will be picked up on and recognized by certain readers, the kind I value.”

I always ask the writers I interview if they have any parting thoughts, and for the most part, they merely thank me for providing them the opportunity to appear on Indies Unlimited. While that’s nice, I usually leave that out because that is why we are here—to celebrate independent authors. David gave a very deep and poignant answer I felt I had to share with you though. He said,  “I can’t think of anything I’ve done well enough yet to justify pretending I’m a fount of writing wisdom or knowledge. Other than my words. At the end of it all, that will be what’s left. Our words. Let’s make sure they’re good ones.”