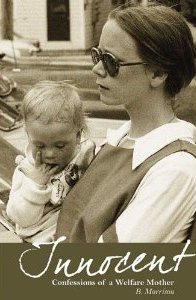 Today, we get a sneak peek of author Barbara Morrison’s memoir, Innocent: Confessions of a Welfare Mother:

Growing up in a prosperous neighborhood, B. Morrison was taught that poverty was a product of laziness and public assistance programs only rewarded irresponsibility. However, when her marriage soured, she abruptly found herself an impoverished single mother. Disowned by her parents and facing destitution for herself and her two small sons, she was forced to accept the handout so disdained by her parents and their world: welfare. This dramatic memoir tells how one woman finds and grasps the lifeline that ultimately enables her to become independent.

Innocent: Confessions of a Welfare Mother is available on Amazon.com and other online bookstores.

When I was growing up in Baltimore in the fifties and sixties, Roland Park and Monroe Street were worlds apart. One Sunday, driving down Monroe to check on a patient at St. Agnes on the way out of town, my father sermonized about the problem of overpopulation, denouncing the way “worthless” people multiplied like rabbits.

“It won’t be long before the world is overrun,” he said.

My mother agreed. Looking out at the dilapidated rowhouses and the dirty steps, she said, “What we need is a good plague.”

One of my brothers said, “But then we’d be killed.”

My mother didn’t turn her head as she replied, her voice tight and thin. “It wouldn’t be my children who died.”

I ignored them, as always. They were like the adults in the Peanuts comic strip: off-stage, making incomprehensible quacking noises. They had nothing to do with me.

The second of six children, I learned early to stay off my parents’ radar. I didn’t know why I seemed singled out like the ugly duckling to be the one who didn’t belong, but thought it might be because of my blond hair. Adults always commented on how I stood out in our flock of dark-haired children. The iceman, my mother would say, which made no sense to me. I was not cold. My earliest memory is of lying stomach-down under the couch, my head sticking out, propped up on my elbows, so I could see the television. I was four, and Roy Rogers was one of my favorite shows. My brother—a year and a half older—sat on the couch and my sister—a year and a half younger—on the chair. We didn’t talk to each other. The baby mumbled to himself in the playpen.

Over the television’s whinnying horses came the clack of my mother’s heels in the hallway. Quickly I scooted further back under the couch and put my hands over my head.

Her heels stopped at the door. There was a long pause, and then they started back down the hall again. I slid forward until I could see the television. My brother and sister hadn’t moved.

As I got older, I found that as long as I got passing grades, showed up for dinner, and slept in my own bed, my parents never asked what else I did. It was not hard to stay out of their way; my father worked nearly all the time, and my mother was busy at home. She ruled the house with harsh words, backed up by the stinging threat of the yardstick or the wooden back of the hairbrush. I was amazed to learn later that it was normal for children to do things to attract parental attention. I wanted exactly the opposite.

I assumed other children were like the kids in books: happy souls with loving parents, lots of jolly friends and exciting adventures. My own siblings were like foreign countries to me. We didn’t talk. I had closed my borders and withdrawn to my inner life. I was the invisible girl.