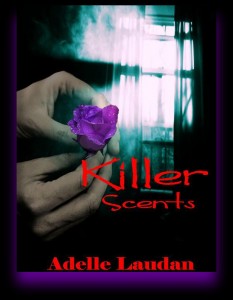 Today, we feature a sneak peek of the romantic suspense novel, Killer Scents, by Adelle Laudan.

Becca and Randy are Harley riding detectives who join forces to find the ruthless killer the press have dubbed The Florist. What does the flower he places in his victim’s hands have to do with the sick, twisted way he ends their lives? Will they track him down before he strikes again, or will a turn of events find one of them at the mercy of a demented killer?

Killer Scents is available through Amazon.com, Amazon UK, and all Amazon channels.

Here is an excerpt from Killer Scents:

Not even the rustle of leaves intruded on the sinister concerto playing over and over in his mind. Only one obstacle stood in the way of his cleverly orchestrated plan: a rather intrusive beagle that barked at everything and anything. He’d come too far to have a four-legged shit machine jeopardize it all.

It was much easier than he imagined. The stupid mutt didn’t hesitate to snatch the strip of beef jerky he held between the fence boards. It took less than a minute before Shithead lay on the ground, frothing at the mouth while a lethal dose of pesticides shut his yap for good.

His owner’s reaction had been an added bonus. An hour or so later, the kid, no more than twelve years old, kicked a can up the road toward the house. Several minutes after the boy disappeared inside, ear-splitting cries filled the cul-de-sac.

Too bad I don’t have any more of that jerky. I’d shut the kid up, too.

He diverted his attention to the familiar whine of his next victim’s relic Pinto rounding the corner. Sandra Bedows parked out front of her tidy bungalow and opened the door. She shifted her massive belly to the side, extracting herself from behind the steering wheel and then lumbered up the pathway to her house. The swish of her overstuffed polyester pants rubbing together kept perfect rhythm with her labored breaths.

The acrid stench of her sweat assaulted him as she passed the cluster of bushes he hid behind. It took every ounce of restraint not to jump out and put a gun to her head while she unlocked the door.

Obscured in the shadows of the house, he opened a leather-bound journal to the bookmarked page, and then followed the neatly written lines with his finger to the bottom where he paused.

Happy with the way the room looked for her co-worker’s celebration, I slipped away to freshen up. I wasn’t gone ten minutes and returned to find Sandra Bedows cramming the last corner of my beautiful cake in her mouth.

The woman offered no apology, and when I asked her to leave, she charged and pinned me to the wall with her mounds of fat. Luckily, the first of my guests arrived and were able to talk her down and convince her to leave.

Do I have to worry about her coming after me again? If she does, surely I’m as good as dead…

With a definitive nod, he tucked the book safely away and straightened his stance. He then shrugged the thick strap from his shoulder to gain access to a long, black, cylindrical case carried on his back. He pulled out a most exquisite fuchsia azalea protected by a sleeve of heavy Cellophane.

He drew a deep breath and then let it out slowly.

Calm down. You’ve been over this a hundred times. Stick to the plan and nothing can go wrong.

A quick look up and down the street assured him he was safe to step out of the shadows. He quickly rounded the corner of the house and knocked on her front door.

Ready or not…it’s time to die.