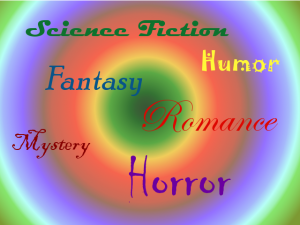 I don’t know about you, but sometimes it seems like every fifth indie author I meet is writing some kind of genre fiction – sci-fi, fantasy, thrillers, romance….

Oh, wait. Apparently I’m not that far off the mark. The Guardian ran a story this week about how indie books accounted for more than twenty percent of the genre e-books sold in the UK last year. The stats come from Bowker Market Research, which ought to know a thing or two about book sales and distribution.

Bowker says trad-pubbed books still dominate when dead-tree volumes are included – just two percent of all books sold in the UK last year were published by indies. But when only e-book sales are tallied, the percentage of indie books pops up fast. And when you look at only genre fiction, we indies own a healthy slice of the marketplace.

None of this is news, really. A quick glance around any writer’s group on Facebook will reveal a preponderance of indies writing speculative fiction, romance, thrillers, or humor. Heck, I’ve pretty much just covered the collected works of the IU minions with that statement.

The more interesting question for me – and it’s one the statistics don’t cover – is why that’s so. Genre fiction has always been the red-headed stepchild of the publishing industry; publishers have been glad enough to support their families on their earnings from it, even as they loftily proclaimed their true calling was to publish serious literature (you know – the stuff that doesn’t sell as well).

Why do so many of us write genre fiction? The easy answer, I suppose, is that it’s what most of us read, and the writing coaches keep telling us to write what we know. But we know the classics, too – or did, when we were in school.

Of course, a number of those revered authors would be reclassified as genre writers if they were working today. Mark Twain wrote humor. So did Jane Austen – and she wrote romance, to boot. Charlotte Bronte crafted a happy ending for Jane Eyre, so I guess that makes her a romance writer, too. Edgar Allan Poe not only wrote horror, but he is also widely credited with penning the first modern detective story (although fans of Willkie Collins would beg to differ). Kafka wrote humor, albeit black humor – what else would you call a story in which an ordinary guy transforms into a giant cockroach overnight? And Jules Verne? H.G. Wells? They pretty much invented science fiction.

If Don Quixote wasn’t living in a fantasy world, I don’t know what else you’d call it. And Beowulf might well have been the first epic fantasy ever.

So hold your heads up high, fellow genre writers! We carry on a proud tradition that dates back centuries, to the very dawn of storytelling. We’re not only writing stories that we ourselves enjoy reading, but we’re also writing the kind of thing that has entertained and educated humanity for thousands of years.

Tell me: Do you write genre fiction? And if so, why?