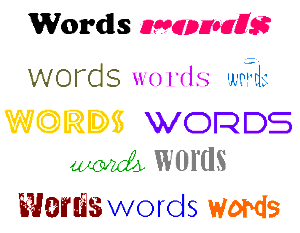 I read a lot of words. I read submissions from strangers which, in some ways, are the best kind because I’m not pre-disposed to love them simply because I know and love the author. I also read every word every one of our Beans* present to us because that’s our arrangement – they write, I read.

When I was much younger, I played in a community orchestra. I won’t tell you what instrument I played. It is sufficient to say that my greatest contribution to music is that I am an avid fan, however they needed someone to fill that second chair and I could hold the instrument without looking like a fool, so there I was. There was a young woman who, by some cruel jerk of the strings of nepotism, was frequently invited to sing with us. She was quite confident of her operatic vocal skills, though equally proud of her untrained status. In short, she would have been excellent at Coldstone, singing a few bars of some thank-you song when someone left a tip, and not much else. In much shorter, she stank.

She filled even the simplest tunes with elaborate vocal arrangements and emotive gestures; she was perhaps the only person to turn Twinkle, Twinkle, Little Star into a dramatic production Wagner could only imagine. She ignored the orchestra behind her and the conductor at her side. When a new director took over, he told her in public and anything but concise terms how bad she was. She was devastated. Even those of us who had endured her over the top performances for almost two years were devastated for her. Her tearful yet earnest explanation was that she loved music and wanted every song to be ‘powerful and beautiful.’

I read a lot of stories written just as she performed. Taking themes and characters and situations that are already strong and evocative, these untrained but devoted and eager authors fill every nook and cranny of their stories with florid descriptions, unnecessary adverbs and often misapplied adjectives. In some cases, the stories are so filled with the author’s earnest love of words that it becomes laughable even to the most tolerant of readers. They become little more than a teenager’s diary doodles, and should not be published.

So, in a public and not too concise way, I say to you, Dear Hopes-To-Be-Published-Someday-Writer, lock up your beloved Thesaurus and give the key to someone who is preparing to move to Algeria. Then sit down and start over. Tell the story – do not let it drown in a swamp of verbiage. Words are like a surgeon’s scalpel and must be used with the respect and skill due them. Respect your reader, too, don’t try to impress them. Tell them who is there, where is there, what is happening there and when it is not obvious, why it is happening there. And move on. This will move your reader, which is why you are writing. Move them to sigh, to laugh, to weep, to be enraged or enthralled or to sleep with the lights on all night. Do not move them to fling the book away in disgust.

When selecting those precision tools, make sure you know how to operate them. I’ve read some hilarious pieces that really weren’t meant to be funny, but the writer used a word to impress without being sure of the word’s actual meaning. And…. don’t be mean. Let your characters be mean if it suits the story, but, unless you’re writing in first person, don’t let the narrative convey a dislike or disdain for someone else or a group of someone elses.

Finally, don’t be afraid of the word ‘said’. It’s not a dirty word. Scraping the bottom of the synonym barrel for dialog tags makes you look like an amateur. Screamed, cried, wept, giggled, snorted, averred, shouted, moaned, answered, stated, remarked, revealed, reposted, begged, insisted, implored divulged…all good words, all acceptable words, but words which should be used only when they are the only words which can accurately convey the feeling or situation in which the dialog is being presented. These words should be used once or twice at most in a full length novel. Sometimes you don’t even need a tag. Let the context of the dialog be enough.