Author Yvonne Hertzberger describes her writing as primarily character-driven. Though plot and description play an important part, she feels they are secondary to creating characters that grow and develop, that readers will identify with and want to spend time getting to know. She says, “I get into their thoughts and emotions, and even often describe the scene through the eyes of a character. I try to use language that is accessible but still literate. I believe that if you need a dictionary beside you to ‘get it’ you will not escape into the story.”

Yvonne says she is a people-watcher and derives many of her insights into the behavior of her characters from seeing how real people interact. “As well, I like to think about social issues and spiritual issues in new ways and play with how that might change how my characters see their world,” she adds.

Asked to describe her biggest challenge as a writer, Yvonne says it is maintaining the discipline to organize her time, preserving sufficient time to write while balancing the multiple demands of social networking, promotion, and marketing.

With respect to the issue of marketing her work, Yvonne avails herself of all the usual suspects in electronic social media (website, twitter , facebook, blog and LinkedIn), but suspects she has sold very few books to people she has never met. “That said, I have only begun to create an on-line presence over the last several months so I hope that will change as time goes on.”

Yvonne reads other indie authors including,  Rosanne Dingli, Ruth Barrett, Tom Kepler and KS Brooks, and has been very impressed with all of them. “The publishing industry is missing out on a huge amount of talent,” she says.

Her advice to aspiring writers? “Don’t expect to get rich any time soon. Read voraciously, in your genre, but also in other genres. Write, write, write. Get feedback but don’t let it rob you of your own voice or your own truth. Learn all the rules of writing and be able to use them, then break them consciously when it serves you, knowing why you do.” 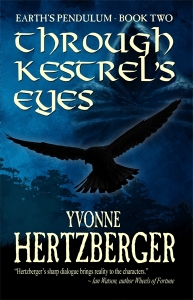 Since the end of the Red Plague the people have enjoyed peace. That ends when the rulers of both Lieth and Gharn are toppled by traitors. Earth, goddess and source of Balance, suffers from this. Famine is inevitable when the rains fail to come.

Liannis, powerful seer, is thrust into her role with her training incomplete. She battles self-doubt and the forbidden lure of romance while Earth requires sacrifices that test her to her limits.

A kestrel allows Liannis to see through her eyes. She and a white horse accompany her as she faces one test after another. Yet both she and Earth cannot heal until the Balance is restored.

Through Kestrel’s Eyes is available from Amazon in both Kindle and print format.