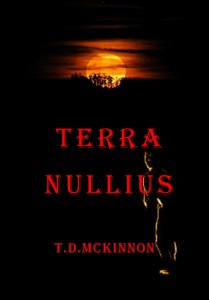 Terra Nullius gives a human face, with all the complexities that entails, from the point of view of the people who were the standing residents of Tasmania, formally known as Van Diemen’s Land, originally, simply The Land.

It took just seventy years to all but obliterate a race of people who had taken care of their land for more than forty thousand years. Trucannini, witnessed the rape and murder of her sisters, mother and brother, and the mutilation and murder of her fiancé, and was herself pack raped by the time she was sixteen. Why are the facts of such huge, systematic atrocities not taught in Australian history lessons? Why are such details about the 19th century not common knowledge even in Tasmania, let alone Australia and the world at large? A nation’s shame perhaps?

And now, an excerpt from Terra Nullius…

The wailing penetrated Doctor Allen’s sleep waking him with a start. Fumbling with the lamp at his bedside, it seemed to take an eternity, as the wailing continued to build into a crescendo; eventually the lamp flickered into life. Pulling on a robe, he stumbled through his dwelling and out into the night.

The wailing, now more like an eerie, keening howl, emanated from the main redcoat shelter fifty paces away, ablaze with lamplight. Gathering in front of the shelter was a rapidly growing crowd of Caretakers; their angry voices gaining volume.

As he hurried towards the hut the wailing stopped abruptly, but then immediately began again. Forcing his way through the crowd of natives, he banged on the door. “What the devil is going on, Sergeant Wight?!”

“Sorry sir…” said the redcoat commander opening the door, “We was hoping to quiet her down before she woke you!”

“What, in God’s name, is going on here?!” Three redcoats were attempting to subdue Trucannini while, tiny as she was, she was doing a good job of keeping clear enough that she might continue to wail. “Stop this at once!” he ordered. “Unhand her this minute!”

Glad of the opportunity to avoid her accusing look, Doctor Allen turned a questioning eye on Sergeant Wight, “Well?!”

“Sir… We was alerted to what we thought was a corroboree in progress. On’y to find this un’ in the process of burnin’ ‘er ‘usband,” he said.

“What!?” spluttered Doctor Allen. “Were you in time to stop the heinous, heathen act?”

“No sir… ‘Fraid not. They’d built up a pretty big bonfire and perched ‘im atop like bleedin’ Guy Fawkes… There was no way to put it out without riskin’ life n’ limb, sir.”

Angry now, glancing in Trucannini’s direction as she touched her bruised and broken lips, he said, “Who struck her?”

One of the redcoats, shifting uncomfortably and looking at Trucannini said, “She grabbed me privates, sir… it were a reflex action.” Doctor Allen saw the ghost of a smile behind her stoic defiance.

“You deliberately defied my orders!” he accused, getting angrier by the moment.

“I deliberately obeyed the laws of my people…” she said, carefully measuring her answer. “I inadvertently defied your orders,” she finished, demonstrating a far greater understanding of his language than anyone in the room; except perhaps himself.

Seething in silence for a moment, feeling the blood pulse at his temples, he thought, ‘All the stories I’ve heard about this native woman are true.’ Taking a slow, deep breath he said, “You do know that I must make an example of you, don’t you?”

She nodded, and there was that ghost of a smile again before the stoic, arrogant, defiance returned.