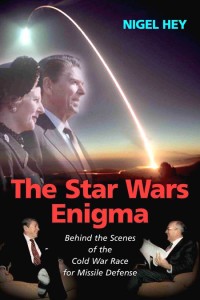 Today we have a sneak peek from author Nigel Hey’s book: The Star Wars Enigma: Behind the Scenes of the Cold War Race for Missile Defense.

After 40 years of East-West nuclear standoff, President Ronald Reagan created the program he called the Strategic Defense Initiative, nicknamed Star Wars. This book contains a wealth of information about Soviet, as well as American, efforts to rule the skies with exotic new defensive weaponry. Personal interviews with American, Soviet, and British experts provided thousands of words of previously unpublished material upon this pivotal gambit in the Cold War stakes. The Star Wars Enigma traces the origin, the proponents and opponents, and the drama that accompanied the downfall of Soviet defense strategy and ended the threat of East-West nuclear holocaust.

The Star Wars Enigma is available from Amazon US, Amazon UK and Barnes & Noble.

And now, an excerpt from The Star Wars Enigma…

Evgeny Velikhov, the respected mandarin of Soviet Russia’s huge nuclear research empire, stirred his bulky frame and stared out bleakly through the scarred Plexiglas window. The airliner was banking gently around to join the traffic pattern out of Washington on the first leg of his long flight home to Moscow. It was March 24, 1983, and the morning newspaper lay on his lap. It was partially unread, for Velikhov, though near-brilliant in his use of spoken English, was not comfortable with an unfamiliar alphabet and a lexicon so different from the Slav tongues. But the small, modestly worded headline, at the top right of the New York Times front page, wrapped it all up: “Reagan Proposes U.S. Seek New Way to Block Missiles.”

The news left Velikhov profoundly upset. There was a needle-sharp mind behind his round, almost-baby face, and a wealth of tactical insight that told him this meant trouble. Toughness and good humor generally managed to reside, improbably, behind the pair of steady brown eyes that were set in that high-foreheaded face—but not now. The Soviets and the Americans had been on Armageddon alert for decades; each had a huge inventory of nuclear-tipped missiles, capable of reducing the adversary’s cities to piles of radioactive rubble. Now Reagan was threatening the balance that existed between them. If he put real muscle behind his high-tech missile defense idea, and if the Kremlin’s more paranoid bureaucrats were sufficiently alarmed, they would soon be demanding more money for their own programs. Some might even propose a preemptive strike on the West. It wouldn’t be the first time. The physicist ran a palm impatiently across his thin wash of hair and swore softly.

Velikhov knew that if the Americans put serious money into some new way of shielding their territory from intercontinental missiles—they had been talking about using high-power lasers and other “death ray” weapons—the nervous men of the Soviet missile-defense community would be petrified by the mere possibility that such a plan might work. Old fears, embedded and almost folkloric, would be reinforced. Was it possible that Russia could become vulnerable again, as it had been against the Mongols, against Napoleon’s army, and against the Nazis in World War II?

Below, towns and farmland drifted by, looking increasingly like a two-dimensional reconnaissance map as the Boeing 707 gained altitude. But Velikhov wasn’t interested in the view. Once he returned to Moscow, there would be meetings. . . and meetings. This time, as the Americans with their flair for metaphor would have put it, the shit had really hit the fan. The Russian grunted to himself. It was nonsense perhaps, but dangerous nonsense nevertheless.

One thought on “Sneak Peek: The Star Wars Enigma”