When you go into most any large modern building, whether an office complex or a shopping mall, you may find a little information kiosk with a map. On the map, there will be an indication, a little x or a dot, that shows you where you are standing in relation to everything else in the building. It usually reads, “You are here.” 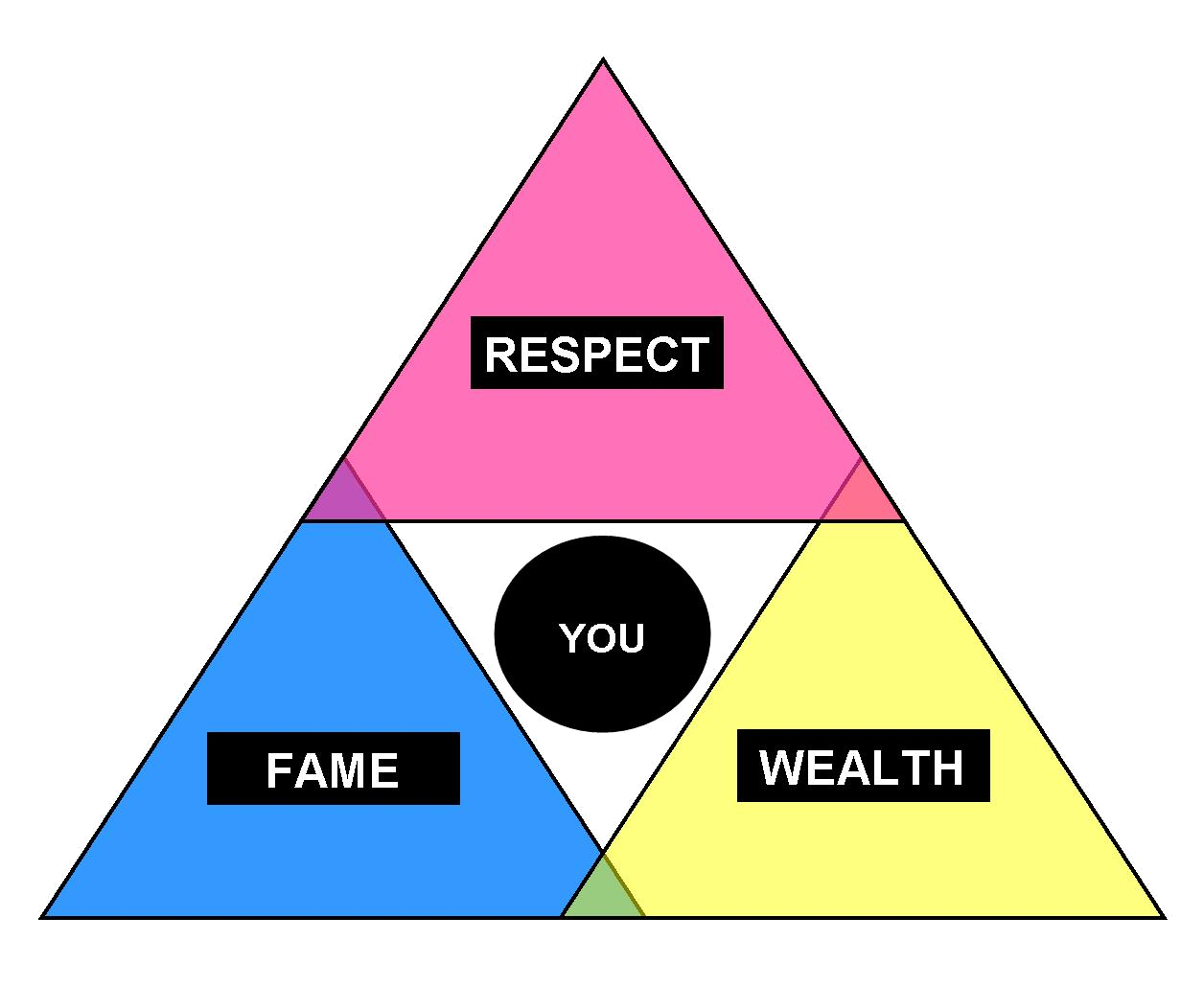 Indie writers work hard. We keep our heads down and plow forward. It’s not too terribly surprising to find that when we pause to look up from our work every once in a while that we really don’t have a good idea where we are.

The chart at left is an illustration of where you are. The three colored triangles represent the three broadly achievable goals being  wealth or fame or respect. You’ll note some slight overlap between those triangles. A small percentage of writers may become famous and wealthy, or famous and respected, or wealthy and respected.

While fame and wealth are self-explanatory, respect as used here really refers to literary acclaim. This is usually reserved by those who confer it to those authors whose work is beyond the ken and palate of the plebeian masses. One is hard pressed to find a shining gem of high literature that approaches the sales figures of execrable but wildly popular books like 50 Shades.

The dot in the center of the chart—in the white triangle, untouched by the fabulous colors of wealth or fame or respect—that’s where you are. That’s where we all are. We are still struggling toward some vague goal line, really only aware of our effort and not our proximity to the objective.

Oh, we use certain proxy measures. We might salve ourselves with the number of titles now under our belts, the number of different genres in which we have planted our respective flags, some little award we’ve won, how our numbers of Facebook fans or Twitter followers have grown. Like all proxies, those values are mere placeholders. They don’t represent tangible progress.

The real progress is not in those values, but in you and your growth as a writer. You see, you can take that little dot and push it into any one of those triangles by some mystic stroke. Maybe for reasons no one will ever fully comprehend, your sparkly teen zombie book will catch lightning in a bottle and you will become an “overnight” success. The person who will have the least understanding of that phenomenon will be you. All you can really do is relate the things you did, the steps you took and then BAM! Success! Other people will try to build that same ladder and will fall. Success like that capricious, unpredictable and wholly unexplainable.

It’s easy to look at that little dot in the middle and will it one way or the other. It is possible even to make concerted steps in any of those directions. What most people miss though is the other choice: GROW THE DOT.

By learning, honing, writing, editing, sharing, helping, reviewing, and critiquing, you are growing as a writer. Your toolbox is bigger than it was when you started out. You are networked and supported. You have sounding boards that were unavailable to you before. You learned a few things from any bumps and bruises you got along the way and now you are a better writer. Your dot is bigger. When it grows enough, you will cross those planes into wonderland. It will be slower. It may not look like lightning in a bottle. You may not even notice it at first.

Little awards, a slight sales bump, a new 5-star review, another 500 words on your WIP, one more title in your back catalog; those are all good things. Those all represent a modicum of growth. Your dot got a little bigger and you are closer to breaking the planes. Heck, one day you might even get a guest post published on Indies Unlimited. It could happen.

Keep going. Keep growing. It will happen. I believe that.