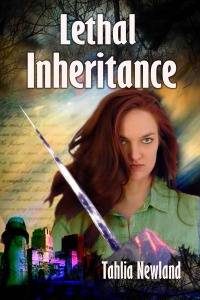 You can’t send police into a tunnel that doesn’t exist after a villain they can’t see, so when shadow demons kidnap her mother, Ariel has to mount the rescue mission herself. She enters a hidden layer of reality only to find that the demons are hunting her, and they feed on fear. Ariel must defeat them before they kill her and enslave her mother. But how do you kill terrifying demons when your fear makes them stronger?

A quirky old guide teaches her how to locate and unleash her inner power, and she falls in love with Nick, a Warrior whose power is more than either of them can handle.

Lethal Inheritance is available on Amazon.com, Amazon UK, Barnes & Noble and Smashwords as an e-book.

And now, an excerpt from Lethal Inheritance:

Ariel jolted awake to the brutal sound of splintering wood and a resounding crash at the side door.

‘Ariel. Run!’ Her mother’s scream sliced through the fog in Ariel’s brain.

Her eyes flew open. She catapulted out of bed and stumbled towards the door in confusion. A series of thuds came up the hallway, getting closer, as if someone was kicking all the doors open. Ariel grabbed her fleecy Ugg boots, opened the window and jumped out just before her bedroom door crashed open.

She flung herself under a leafy shrub and pushed back against the fence. Bright street light spilled onto the side of her red brick house, but none penetrated her hiding place in the fence’s shadow. Even so, her heart pounded and every muscle in her body tensed in fear. She peered through a gap in the leaves and shivered.

Something black and vaguely human-shaped struggled out the window, cursing in a voice as spiky as ice shards. Its skin, hanging in folds like the fabric of a long hooded cloak, rippled as it turned. White flames flicked, like snake tongues, from two slits in its hideous face, and a thin-lipped mouth curled into a sneer. The claws on its long loose arms flexed and unflexed as if warming up for a fight, and it stunk like rotten potatoes.

Ariel froze, eyes wide, struggling to comprehend the creature before her. Nothing like this existed in her world. It had to be a dream. But it felt horribly real.

A chilling voice from down the path raised the hairs on the back of Ariel’s neck and the creature swung towards the sound. ‘The spawn’s run off. I say we take this one and come back for the other.’

The owner of the voice, another creature, came into view, eyes blazing red. Ariel gasped and slapped her hands over her mouth to muffle the sound. But the beast’s attention fixed on Ariel’s mother who hung limply in the red-eyed creature’s arms, her hands tied behind her back. Something black and shiny gagged her.

Ariel’s world began to unravel. This could not be happening, and yet, it was. She stared at the impossible creature and one word only penetrated the numbness of her mind. It rose as if from a long forgotten memory—demon.

‘Stand and walk,’ the red-eyed demon growled as he set her on her feet, ‘or I’ll stick you with this.’ It raised a clawed index finger in front of Nadima’s face and the claw grew into a silvery talon the length of Ariel’s forearm. The fiery line of the creature’s mouth curled with sadistic pleasure.

Nadima jerked into life and ran, but the white-eyed demon threw a noose over her head. It jolted her to a stop and turned her scream into a choked gurgle.

Ariel pressed her lips together, stifling the urge to cry out.