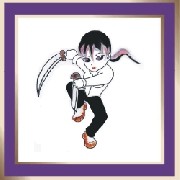 A.C.Flory is a science fiction writer who lives with her family, and a menagerie of cats, dogs, magpies and alpacas, on a 1.6 acre block in a bushfire prone part of southeastern Australia. During the cooler months she writes, landscapes her garden and enjoys living in amongst the gum trees. But beauty always comes at a price, so the hot, dry months of summer are spent checking her fire-fighting equipment and biting her nails.

As a writer, she draws upon these contrasts in Australia’s often harsh environment to imagine worlds where aliens must face their own battle with the elements. Yet even when writing about the most bizarre of humanoids, she uses the contrast between ‘them’ and ‘us’ to provide insights into the nature of human beings.

In her spare time, A.C.Flory reads voraciously, listens to an eclectic range of music, plays online games [mmo’s] and maintains her blog, Meeka’s Mind. You can find her at http://acflory.wordpress.com.

Vokhtah
by A.C. Flory
Available from Amazon US and Amazon UK.

Vokhtah is not a gentle planet. Ravaged by twin suns, it tests all living things in the battle for survival, but none more so than the iVokh.

Intelligent, and clever with their hands, the iVokh [literally meaning ‘small Vokh’] live in eyries under the protection of their huge, winged cousins, the Vokh. However when the Vokh battle each other, the first casualties are always the small creatures who serve them.

The only place on the whole planet where iVokh can truly be safe is in the Settlement, an eyrie ruled by the Guild of Healers rather than a Vokh. Yet even there, change is coming, and not for the better. Thanks to the healers’ obsession with abominations, even the Settlement may soon become a battle ground.

As one of the few healers not terrified of abominations, the Blue is determined to save the Guild from itself. It leaves the safety of the Settlement with a caravan of Traders, intent on manipulating the Vokh into dealing with the abomination themselves. However life, and iVokh politics, are never simple.

Aided by just one reluctant ally, the Blue struggles to survive in a savage landscape where even the elements are vicious. If it dies without completing its mission, the Settlement could well die with it. Yet what can two, frail iVokh do in a world where the predators are all starving, and iVokh are very much on the menu?

Time is running out, for both the Blue and the Settlement.