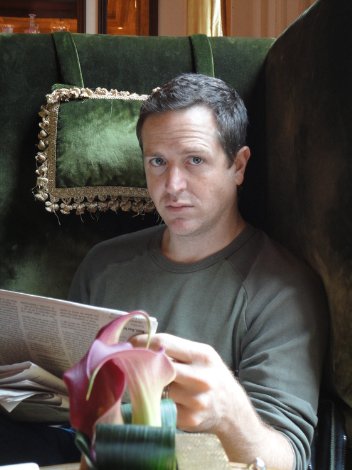 Here’s the scoop: I’m sitting at my work station on the Death Star, flicking dried bits of chewing gum at Carol Wyer, when suddenly I get an alert that Hugh Howey’s ship is cruising past, just out of tractor beam range. Knowing that the Evil Mastermind will be less than happy if I miss this opportunity, I run down to the shuttle bay. With no time to lose, I wind up the rubber band on the back of the shuttle really, really tightly. Then, I get in the shuttle and – ping! I’m hurtling across the heavens on an intercept course with Howey’s ship. I reach it, knock on his window, and manage to ask him these few questions before the rubber band contracts and pulls me and the shuttle back to the Death Star. Phew, that was a close one! 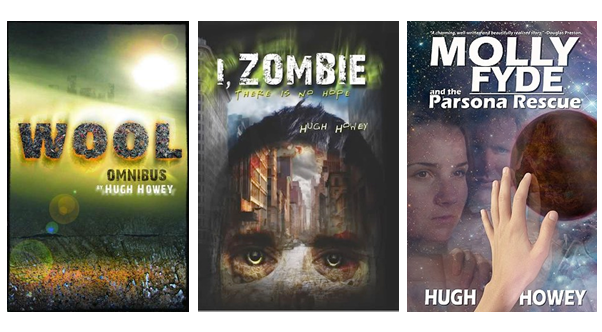 In case you’ve been living under a rock, Hugh Howey is the author of the award-winning Molly Fyde Saga and the New York Times and USA Today bestselling WOOL series. The WOOL OMNIBUS won Kindle Book Review’s 2012 Indie Book of the Year Award—it has been as high as #1 in the Kindle store—and 17 countries have picked up the work for translation.

Here’s what Hugh had to say:

Hugh, you’ve mentioned that you write in multiple genres. How do you handle different genre projects at the same time? Do you have any difficulty in switching voices and moods?

Man, I wish my moods were more stable! But since they’re not, it helps me to have several projects going at once. If I get stuck or lose energy in a science fiction story, I can pop over to my erotica novel or my memoirs and add a chapter (or write one chapter and copy/paste into both of these).

I think my voice is more suited to the plot and characters than to the genre. I like getting in touch with the mood of a piece, and it colors my vocabulary, my sentence flow, my injection of humor or horror. What I’ve found, incidentally, is that the vast majority of readers are keen to explore different genres with the same author. I get a lot of emails that start off with how much they loved Wool, but that they just read I, Zombie or The Hurricane and enjoyed them even more.

Putting Wool aside for a moment, which of your other titles are you most proud of/satisfied with?

I, Zombie. It’s a book I don’t recommend anyone reading (I even warn them not to in the product description, and this isn’t a marketing trick. I really advise against it). But to me, it’s the most personal work I’ll ever write. It’s my ode to New York City, the only novel in which I directly confront my experiences at the World Trade Center on 9/11, and also a very public internal monologue in which I wrestle with my lack of belief in Free Will. In sum, it’s horrific. But I’m very glad I wrote it.

If you could turn back the clock, is there anything you would do differently?

I would wind that clock back until something snapped. I would go back to when I was twelve years old, dreaming of becoming an author, and I would have stuck with all those novels I started and never finished. I would have goofed off less and written more. I would have thirty books published by now. My lack of faith in myself to write to completion is the one thing I wish I could go back and change. It shouldn’t have taken this long to figure out how to stay motivated.

Have you participated in any groups similar to Indies Unlimited, or other writing groups? If yes, were they helpful?

Absolutely. I was part of a writing group in Boone, N.C. called Highcountry Writers. I did workshops in the writing forums of SF World. I stay active on the Kindle Boards Writers’ Cafe. There’s so much to learn from other writers and from their feedback. Writing is an inherently lonely endeavor. Having a place to commune with like-minded people is a blessing.

What would you say to a young, new writer who has a few great story ideas and little else, and who looks aghast at all the things self-publishing involves – what key advice would you give him/her?

Self-publishing involves as much or as little work as you want to invest in it. You don’t need to market your book. You don’t need a website. You don’t need to upload your work to sales channels. If you enjoy writing stories, you can email them to friends for free and see if they are entertained. You can post them to a blog in an instant.

The hard work is self-inflicted. I put in very long hours and work every single day because I love what I do and because I want to put out the best work possible. Don’t feel any pressure to do likewise. If you enjoy writing, do as much of it as you can. There has never been a better time to be a writer, whatever your goals and ambitions are.

Do you think a self-published book will ever win a major literary award? If yes, how far are we away from that day?

Absolutely. There are a few literary awards like the Hugos that are voted on by the fans, and the success of indie breakouts has highlighted how much power fans truly wield. As for awards like the Man Booker, Pulitzer, National Book Award, etc., I would be surprised if we didn’t see a win from a self-published book in the next five or six years. My guess is that the first of these will come from a major author who decides to publish something on their own that was too quirky or non-commercial to be picked up elsewhere. Look at Tinkers. It won the Pulitzer and came from a small press. A book like that could have been self-published and shocked everyone. I can’t wait to see it happen! (The 2013 Hugo Award nominations are open, by the way!)

Final question: Indies Unlimited has quite a few lady writers who, if they can’t actually have your babies, would nevertheless appreciate an opportunity to throw their under-garments at you. Any special message I could convey to them? 🙂

My wife and I live in Jupiter, Florida. So my advice would be to face south and throw away! Granted, your room is going to look like a mess afterward…

Look for WOOL in hardback in 2013 from Random House UK and keep your fingers crossed that Ridley Scott and Steve Zaillian will do something exciting with the film rights!

26 thoughts on “Interview with Hugh Howey”