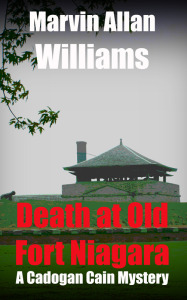 Today we have a sneak peek from the new suspense thriller by Marvin Allan Williams, Death at Old Fort Niagara.

In Death at Old Fort Niagara true fear is in the unexpected. It grips the heart of a man who thinks his past is behind him. It troubles the mind of a woman who has been living two lives, and it pounces on the innocence of a child at play. For Cadogan Cain, Angie Bianco, and a boy named Frankie, fear is hand delivered by a ghost of a man whose outward beauty hides a soul as black as coal.

Here is an excerpt from Death at Old Fort Niagara:

The man with the pretty face later discovered a competent surgeon could have removed the fragment within acceptable risk to his well being. After hearing this he had the incompetent doctor brought to his compound for dinner. They were served the finest meal the doctor had ever had. The wine flowed like water and the doctor took advantage of his host’s generosity with greedy delight. After dinner the two retired to the library and shared good Cuban cigars and fine brandy. The doctor could not believe his good fortune. When he was first brought to the compound he thought he might be in some form of trouble, but surely that was not the case after such a great evening. His host remarked it was a shame that the doctor’s family could not share in the moment.

They took a walk on the grounds and his host took him to a structure near the back of the compound. As the señor opened the heavy door the doctor heard screams. He hesitated, but his host nudged him further into the dark hall. Upon reaching the first door of several in the long hallway the doctor was forced to look through a small opening in the door. There he saw his wife bound to a table. Her tormentors were doing unspeakable things to her. The doctor tried to retreat from the door but his host shoved his face back into the opening, making him watch. The señor then moved him from door to door to witness the torture of the doctor’s entire family. By morning’s light the doctor was shoved from the compound and left to live with the daily pain of remembering what it was like to watch each member of his family die at the hands of Señor La Muerte—Mister Death.

That was what all of the locals called him. No one knew his real name and he wanted it that way. He grew up a nothing—poor and alone—in the slums of La Paz, Bolivia. He learned quickly that nobody cared about him and if he wanted sustenance he had to take it or die from starvation. Before he was old enough to enter school he was stealing fruit from roadside vendors. By the time he was a teenager he had developed into a handsome young man. His features were perfect which made his face almost too beautiful for a man, but that face allowed him to take the women he wanted for his own needs and then discard them when they no longer pleased him.

Before he was old enough to be considered a man he graduated to killing for money which allowed him to buy his way into the cocaine trade. He very quickly eliminated most of his competitors and those that still existed were afraid of him. It was widely believed that he was the devil himself. Now, here in a boat, on a lake in the U.S., he smiled at the thought. The devil had come to collect a soul.