This is another in an ongoing series of Ed’s Casual Friday posts wherein I cogitate about a topic and offer some opinion, along with what is going to sound like advice. 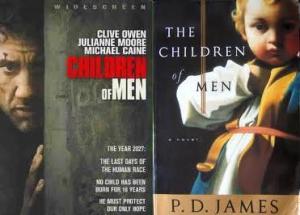 Let me first fully acknowledge that I subscribe to the “Different Strokes” school of literary advice, inasmuch as “What might be right for you, may not be right for some.” So just keep that in mind before you feel the need to tell me that I’m full of dookie, Willis. 😉

Our topic today, Is the Book Always Better than the Movie? To which I respond, that’s like asking if the peanut butter sandwich is always better than the sonnet, as I believe they are two totally different forms to such an extent that the question is largely meaningless.

Yes, writing a book and shooting a movie may both be forms of “storytelling,” but the tools available to the creator(s) of either are not really the same. A movie has one or more writers, but sometimes you can barely notice them beneath the actors, the director, the sound people, a composer, an orchestra, the special effects department, the CGI folks, the stuntmen, the pyro guys, the set designer, the costumer, the snake wrangler, the snake, the key grip and the best boy (I still don’t know what those last two things are). A book has got…a writer. Or maybe more than one, if you can collaborate without choking your partner(s) to death with a wire hanger, but it is usually just one writer. And that poor shlub has got to do everything the battalion of people involved in a movie do; before, during, and after the actual shooting. Including the snake.

Except, not really. Because the writer has one thing that the movie crew does not have when the time finally comes to unfurl the finished work. The writer has a reader.

As writers, we like to think we are creating these vast worlds, populating them with fascinating characters, and throwing them all into heart-stopping drama, hilarious comedy, touching romance, some or all of the above. But we’re not. Our readers are doing that. Everything that “happens” in a written work happens in the mind of the person reading it, not in the words on the page or the e-reader. And certainly not on a movie screen or a digital tv. If an audience member goes to the john or makes a sandwich, Norman Bates keeps whacking people and Thor keeps pitching his hammer around. If a reader stops reading, it’s not just a pause button. It is the end of production (hopefully temporary) to an act of artistic creation that is still happening the very instant that the words are being read, and the world is being created up in the grey matter.

It is my belief, that all things being equal, the average person is going to like the same story they both read as a book and saw as a movie better the first way, because when they read it, they made the story. They didn’t watch the end result of hundreds of other people coming together to do it: They did it themselves, based on the efforts of another person (the writer) to communicate something they made up in their own mind. It is a profoundly different level of communication than is ever going to be possible no matter how good 3-D gets, or how loud they turn up the freakin’ sound at AMC.

Do I have a point in saying all this? I do, as a matter of fact. An awful, awful lot of writing advice these days boils down to the same thing. Whether it’s “move the action faster, K.I.S.S., don’t get bogged down in description, cut to the chase, always move the story forward,” so forth and so on, the commonality often urged upon writers seems to be to make their books more cinematic. To write their story only as if they are writing a movie somebody is going to watch in their head.

And really, that may be perfectly good advice if your main goal as a writer is only to broaden your base, because let’s face it. People are lazy. Just because they chose to pick up a book rather than order Transformers XVII on-demand, that doesn’t mean they want to work too hard following intricate plotlines, challenging characters, or thought-provoking moral quandaries. Fast food sells, at the corner Burger King, on the movie screen, and on the virtual bookshelves. And I’m fine with that. I got two sausage-and-egg McMuffins for $3.33 last Thursday, and it was awesome.

But you know what? There is more to food than burgers, and there is more to literature than Generic Genre-of-the-Moment piece, Number Infinity. Some readers do in fact like reading, even if only once in a while, specifically because they want to experience something richer, and fuller, and deeper than mass media is likely to deliver. True, writing a book just for people like that is probably not the path to achieving vast wealth and power. But if that is what you are after, you really should have gone into credit default swaps or venture capital.

In short, if you are of the school which tends to feel the book is always better than the movie, you might want to take a moment to decide why that is. Then when you are writing your own books, think about if you are actually writing a book, or something else.

Oh, and the pic up at the top, PD James’s Children of Men, plus the movie version with Clive Owens. I totally like the movie better. 😉

———-
And now, another genuine one-star book rating. Consider it a small pick-me-up next time you yourself get a rating that is, shall we say, less-than-stellar.

“The characters were dull and the ending to the story was meaningless.”
– The Perfect Storm: A True Story of Men Against the Sea by Sebastian Junger (the book)