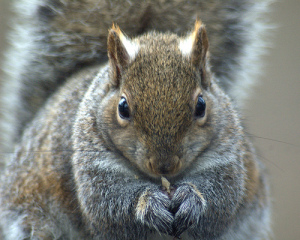 What the Aytch-Eee-Double Hockey Stick am I doing here? I mean here in the middle of this book? Did I not have a plan when I started this? What has been going on for the last ten chapters, and why-oh-why do I have all these characters off in different places doing different things? For the love of Virginia Woolf, every narrative is supposed to have a central trunk from which all the other stuff branches out – I swear somebody told me that in a class at some point – and all I have here is a thorn bush!

Hey, a squirrel out the window. Look at him go…

No! To quote Day Day Prince from The Wire, “Focus, Mother Hugger!” Okay, that was a paraphrase really, not so much a direct quote…I should really watch The Wire again at some point, David Simon is the bomb…

Stop it! Back to the book, yes. Oh jeeze, tell me that page number is wrong, it’s like something out of Wonder Boys. How could I have possibly generated this much verbiage with no earthly idea of where I am going? I can’t even remember who the main character was supposed to be, I thought it was that dark-haired girl but I don’t think I’ve even seen her in four chapters. Maybe I should just go back to there and start writing again. I don’t even know what is going on with this whole part on the boat here…didn’t this start as an anecdote two chapters ago? Have I gone back in the timeline? Thomas Pynchon couldn’t follow this convoluted non-chronologic plotline with cue cards and a Rand McNally Road Atlas. Why does everybody assume I’m related to Rand McNally? I can’t find my way anywhere, not even out of this scene!

I should drive down to McDonald’s for a sausage biscuit…two Sausage & Egg McMuffins just $3.33 for a limited time…hasn’t that offer been going for months already?

Later! First, I will write at least one page on this magnum opus. Yes, self-bribery, whatever it takes. Write or don’t eat, tough guy. Actually, this might be closer to a hostage situation than bribery, per se, vis a vis, ipso facto. Wow, I’m amazed “ipso facto” got through spellcheck. My computer speaks Latin?

Focus Mother Hugger! Okay, just read the last thing I wrote four days ago…is this character telling a story about his childhood? Judy Blume wept, why is this dude peering moodily from the gunwales and rambling on about the orphanage? Was this supposed to be going somewhere? What kind of book am I writing here – I should throw in a swordfight. Everybody loves a swordfight; it’s the car chase of the fantasy genre.

I’ll be darned. There was a point to that. Scene break. That finished the page. I could go eat now. In a minute…

Yes, I see you out there squirrel, go away. I’m busy.

15 thoughts on “A Pantser’s morning monologue upon sitting down to write.”