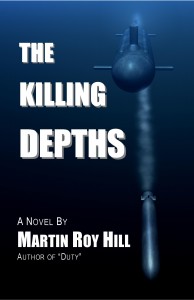 And now, an excerpt from The Killing Depths…

Commander Johnson paced the small amount of open floor space in his stateroom. As he walked back and forth, he studied Schag’s face. His own was like a slag of lava.

“Okay,” Johnson said. “I want to know what the hell you’re doing here, and what you’re doing wearing those clusters.”

Schag took a deep breath and glanced at Culver before answering.

“Captain, I am a special agent with the Naval Criminal Investigative Service,” he finally said. “I am currently serving as an agent-afloat aboard the USS Halsey, investigating crimes that occur within her carrier task force while deployed. The USS Encinitas is attached to that task force.”

Johnson stiffened in mid-stride. He looked quickly at his exec, whose gaze was frozen on Schag. Culver’s mouth was agape. The skipper composed himself and stepped close enough so Schag could feel his breath.

“And just why the hell do you seem to know so much about my mission?”

“I know only what I’ve been able to deduce, sir,” Schag said. “From the course laid out on your plot table, it’s obvious the Encinitas has been conducting covert operations inside North Korean waters. North Korea is known to have developed nuclear weapons and attached them to long-range cruise missiles. It’s also known that the North Koreans have refurbished a handful of old Charlie-class guided missile subs the Russians had sold to them as scrap. Those subs have also been modified to carry the North Korean cruise missiles.”

Schag cleared his throat and continued.

“North Korea has a long history of selling weapons to terrorist nations for hard currency,” he said. “Recently it’s offered one of its Charlie-class boats — missiles and all — to Iran. The Iranians have been scouring the international black market for nukes since their own homegrown nuclear program foundered. I suspect the Encinitas has been detailed to keep an eye on North Korean submarine activities to spot and track the Iranian sub if the deal goes through.”

“You deduced all that just from looking at my plot table?”

“That and the fact the Halsey’s planes have been on alert for the same sub for the past week, sir.”

A grin played at the corners of Schag’s mouth. The captain was not amused.

“NCIS agents are normally civilians, are they not, Mr. Schag?” The agent nodded. “And the last time I saw you, you were on your way to becoming a civilian again, am I right?”

Schag felt the muscles tighten throughout his body. He returned the captain’s glower with an equal intensity. He nodded but said nothing.

“Then why are you wearing an officer’s insignia?”

“Captain, as an agent-afloat, I hold the honorary rank of lieutenant commander,” Schag said.

“That, Mr. Schag, does not answer my question.”

“I felt appearing aboard the Encinitas in uniform might make my investigation easier for the crew.”

“Your investigation?” The captain’s voice took on an edge of irritability. “What investigation, Mr. Schag? Please stop beating around the bush and tell me.”

Schag glanced at Culver, then at the skipper before answering.