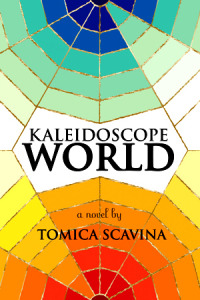 A collector of kaleidoscopes and lousy relationships, Dahlia Kasper moves from New York to Barcelona and starts living in an apartment where her father was murdered when she was four. Her favorite kaleidoscope becomes a gateway to another dimension where she encounters a ghost of a famous physicist who tries to persuade her that reality is like a moth-eaten sweater – full of holes. He needs her to help him plug up these holes and save the world from vanishing, while the only thing Dahlia really wants to save is her sanity.

Kaleidoscope World  is available from Amazon.com and Amazon UK.

And now, an excerpt from Kaleidoscope World…

Copernicus figured out five hundred years ago that we are in orbit around the sun, but Dahlia Kasper’s world was still a flat plate on a tortoise’s back. In her Dahlia-centric solar system, the sun had stopped mattering years ago. When? She couldn’t remember… She’d been told it was when she was four. Early trauma. Screwed from the get-go. Her father was shot under unexplained circumstances. A single bullet. To the heart.

While she dragged her suitcases along Carrer d’en Roca, sweat trickled down her forehead, temples, and back. She stared up at the four-story buildings with their stone façades and little balconies with sinuous, iron railings. Getting ready for this had taken years. Although it took her less than three hours to pack, her psychological preparation had been going on for far longer. A week before, she had announced to her mother that she was leaving for Barcelona and would be staying there for at least three months. Her mother was so shocked that she downed almost an entire bottle of Jack Daniels and sent her six text messages in a row: Luv u kid luv u lots. Plz dontgo 2 Bcrelona, the apt cursd, mattr soaks up negtive enrgy. U + me we gotta b tothegr 2 b safe. Yr dads in heavn, alwys with u, enrgy nver dies, u will pray + feel him near. This is hrad 4 me, crying, u r all I gt, see, stay hr, luv ties us, dont knw how Ill mnage if sthng hppens 2 u. Dontgo if u luv me.

And off she went.

While disoriented tourists clutching ice cream cones were staring up at where old women were nestled among the hyacinths and freshly washed laundry, Dahlia came to a stop at the front door of the building where she had spent the first years of her life. There was an old-fashioned barbershop on the ground floor, where a swarthy, portly barber with a Dali-esque moustache was shaving a gray-haired gentleman.

“En que et puc ajudar, maca?” the barber asked, catching sight of her in the mirror.

Dahlia spoke a little Catalonian. Maca she understood. In Catalonian for Beginners, she had read that it meant beautiful. Her reflection in the mirror had her thinking that the barber had an odd sense of beauty. Pale and slender, with large dark-blue eyes, she saw herself as a blonde, longhaired grasshopper, the result of some bizarre genetic mutation. She was as beautiful as David Bowie in the movie The Man Who Fell to Earth. Though only after he’d shed his artificial skin, contact lenses, and wig and shown himself as he truly was – an alien from the planet Anthea. There were, of course, some guys who liked her looks, who had nicknamed her Pixie. Others found her strange, which led to her other nickname – Eel.