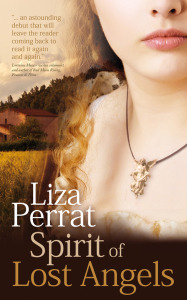 Her mother executed for witchcraft, her father dead at the hand of a noble, Victoire Charpentier is forced to leave her rural village for domestic work in Paris. Suffering gruesome abuse under the ancien régime, Victoire joins the revolutionary force gripping France to overthrow the diabolical aristocracy.

Spirit of Lost Angels traces the journey of a bone angel talisman passed down through generations. The women of L’Auberge des Anges face tragedy and betrayal in a world where their gift can be their curse, in this story of courage, hope and love.

Spirit of Lost Angels is available from Amazon.com, Amazon UK and Smashwords.

Here is an excerpt from Spirit of Lost Angels:

‘Surrender the prison!’ the people shouted, gathering before the Bastille as early daggers of sunlight sheared the dirty brown underbellies of clouds.

‘Get the Governor to withdraw the cannons!’

Two men chosen to represent the mob entered the fortress to negotiate.

By mid-afternoon, when nothing had happened and people were pawing the ground like restless horses, the crowd hacked down the drawbridge chains and streamed, unimpeded, into the undefended outer courtyard.

I heard shouts from the roof. The panic rose in my chest.

‘They’re going to fire on us, quick run!’ I grabbed Aurore and tried to push our way back through the crowd, away from the prison, but we were trapped, unable to move any which way.

The garrison began firing. I shut my eyes and held my breath.

I expected, any second, the hot burn of a bullet would throw me to the ground. Flambeaux blazed, fanning the shrieks of terror and pain as more and more bloodied bodies crumpled around us. Clouds of gunpowder smoke burned my eyes, almost blinding me. I clutched Aurore’s dress, whimpering like a child as we crouched and cowered in what were the most terrifying moments of my life.

As much as I had yearned for things to change––for an improvement to the commoners’ lot––never had I wished for that change to wash in on such vast rivers of human blood.

It was over quickly. Our brave French Guards massacred the garrison and the Governor of the Bastille, de Launay surrendered, his face an ivory-pale mask of terror. The crowd tore and spat at de Launay in his grey frock-coat, clubbing and kicking him to the ground.

Faint with horror, my mouth dropped open as a man stepped forward and drove his bayonet into de Launay’s stomach. He withdrew the bayonet and the Governor staggered upright, only to stumble onto the point of another weapon.

Someone hammered at the back of his head with a lump of wood, another dragged him into the gutter. I glanced around wildly, helpless to stop the grisly attack. I grabbed Aurore’s arm again as a third man fired shots into the Governor’s smashed body, and when he finally stopped twitching, a wild-looking man flicked open his knife, strained the corpse’s head back, and began hacking at his throat. I turned from the gruesome scene, clutching my heaving belly.

I tried again to find a way through the crowd; away from the sickening butchery. It was impossible, and besides, I was certain Aurore would never agree to flee. Her eyes shining, she seemed bewitched, energised, by the bloodthirsty recklessness.

‘The Bastille, symbol of our intolerable regime, has fallen!’ the people shouted, parading the Governor’s head around on a pike.

Our revolution had received its baptism in blood, and I felt too shocked to cry; too stunned to feel anything. I did not even know what I should feel––joy, triumph, sadness? Perhaps a mixture of all of those.