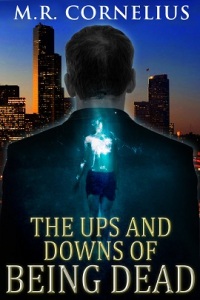 Today we have a sneak peek from the speculative fiction/science fiction novel by author M. R. Cornelius: The Ups and Downs of Being Dead.

Fifty-seven year old Robert Malone is the CEO of a successful clothing store chain and married to a former model. When his doctor tells him he is dying of cancer, he refuses to go quietly. Instead of death, Robert chooses cryonics. He knows it’s a long shot. His frozen body will be stored in liquid nitrogen for the next seventy-five years, and then he’ll wake up in the future. Maybe. If technology figures out a way to bring him back. He’s willing to take that gamble. What he doesn’t realize is that he won’t lie in some dreamless state all that time. His soul is very much awake, and free to move about, just like the others who were frozen before him.

He discovers that he can ride in the cockpit with the pilots, but he can’t turn the page of a magazine. He can sit in the oval office with the president, but he can’t prevent a child from dashing in front of a car. He doesn’t work, or eat, or sleep. These obstacles make it difficult to fall in love, and virtually impossible to reconcile with the living. Over the next several decades, Robert Malone will have plenty of time to learn The Ups and Downs of Being Dead.

The Ups and Downs of Being Dead is available from Amazon US, and Amazon UK.

And now, an excerpt from The Ups and Downs of Being Dead…

At first, he’d done what any intelligent man would do when the doctor folded his hands on his desk and quietly said, ‘You have cancer.’ Robert got a second opinion.

That noted oncologist laid it out in a way Robert could not deny. Like an advertising campaign, the doctor presented images from an MRI and pointed out the large mass in Robert’s liver. Then he produced colorful brochures on the finest cancer treatment centers, pamphlets touting the latest pharmaceuticals, and of course, the bar graphs and pie charts that estimated how long Robert had to live.

For the first time in almost thirty years, Robert took the rest of the day off. He struggled to get through the telephone conversation with his secretary canceling appointments, rearranging meetings. By the time he ended the call, Robert felt so weak he’d braced his arm on the roof of his car and rested his forehead on the sleeve of his hand-tailored suit. Struggling for breath, he was unable to even stop the drool that oozed out of his gaping mouth and dribbled down the window of his Mercedes.

Stale exhaust fumes in the parking garage choked Robert, the low clearance closed in on him. He was practically running when he came out onto the open top level. The heat of the day washed over Robert, and his body sagged. He lurched to the edge of the roof, and looked out over Atlanta, the classic query drumming in his head. ‘Why me?’

When Amanda heard he was dying, she rushed home from her shopping trip in New York. Robert was in his office, on the phone, when she burst in, her cheeks flushed, her eyes aglow. If he had to describe her expression in one word, it would have been exuberant.

Almost overnight, she transformed into a loving, sacrificing wife who put everything on hold for him. She drove him to his chemo appointments. She waited patiently outside the bathroom while he puked his guts out, then helped him back to bed, tucking brand-new sheets under his chin. Death sheets, he’d called them. He was certain she’d agonized over just the right shade and design to go with cancer.

She volunteered for the American Cancer Society, masquerading as a pillar of strength in front of other spouses of dying partners. She even participated in one of those walks – Amanda, who probably hadn’t worn a pair of sneakers since she was ten. And she never went anywhere without that goofy pink ribbon pinned to her clothing.

Robert was sure the only reason she got so involved with the cancer organization was to get first-hand information on how soon he could be expected to croak. She couldn’t wait to get her hands on his millions.

Wouldn’t she be surprised?

2 thoughts on “Sneak Peek: The Ups and Downs of Being Dead”