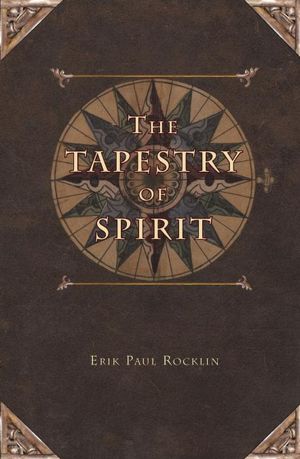 Today we have a sneak peek from author Erik Paul Rocklin’s spiritual fiction novel, The Tapestry of Spirit.

An enchanting, allegorical tale with insights of enduring relevance, The Tapestry of Spirit presents an artfully layered story of an orphan boy following a dream — a dream of a meeting in the East with a mystical figure known as the Mage. A seemingly coincidental encounter the day after the dream introduces the boy to an old man, summoned by the power of the boy’s dream, to serve as his guide and protector during the journey. Along the way, some of the boy’s encounters include a wise, elderly Sage, a blind Seer, a captive boy Monk, a grieving Mother, and a dying Father. And through these encounters, the boy learns of the power of dreams, the value of trust and belief, the vision of the heart, and the capacity of every individual to help in the healing of the World. As the boy journeys to seek the Mage, he comes to understand that in doing so, he also seeks his Destiny Thread, and ultimately, how it returns to the universal wisdom that is The Tapestry of Spirit.

And now, an excerpt from The Tapestry of Spirit…

The boy’s mind was spinning. In less than a day, he had gone from the extremes of belief in the journey he was on and the reasons for it, to belief that truth existed in none of it, and if the Elder were truly a peril to him as the old, blind woman had said, why was he so willing to allow the boy to decide if the journey East would continue?

As the boy’s mind was consumed with conflicted thoughts, the Elder spoke again.

“The pictures in your mind can be changed by what you allow inside. Only you will know if you follow a fool’s pursuit that has been planted by another.”

And with that, the Elder turned and began walking along the crowded road toward the East, leaving the boy with both packs and a mind filled with confusion and uncertainty.

As the Elder drifted into the crowd and became lost from view, the boy’s head grappled with his heart over what to do next.

With his head, the boy thought of the security of going back to the West, to things familiar and safe. Within a few days, he could be back to where he had called home, with the events of the last few days but a memory. No longer would he fear the perils of the journey that had already come to pass, or those that would be sure to follow.

But with his heart, he felt of the hope and promise that seeking his Destiny Thread brought, of meeting the Mage and realizing the Tapestry of Spirit, as he had come to understand these things, and he thought of finding the answers to his unspoken questions.

His thoughts then turned to the Elder, and how everything that he had said to the boy from the moment they met had somehow made the boy feel at ease and protected. He thought about the fact that, until meeting the old, blind woman on the bench, he had never had a reason to doubt the Elder or his intentions. It was only from the blind woman’s words that the boy felt doubt and suspicion, and it surprised him suddenly to realize that his feelings could be stirred and directed by another with such apparent ease.

His final thoughts were then on the words that both the old, blind woman and the Elder had spoken, words of wisdom about what picture he had allowed to exist within his mind. They were the same words of wisdom from seemingly opposing figures, and the boy knew that he himself was the only one that could interpret them.

A clear feeling began to well up within the boy; a feeling that his journey was a journey of truth, and that his pursuits, while uncommon to the masses, were also true. The light of illumination lay before him, with the Elder at his side, while only the shadows of darkness and unanswered questions lay behind.