2013 is going to be a great year for everyone at IU, I can feel it in my bones (you can feel a lot of things in your bones as you get older).

It seems that we (the IU staff and guest contributors) gravitate around subjects that are akin, usually at about the same time. ‘That’s probably because we all face similar obstacles in the pursuit of our literary goals,’ I’m paraphrasing, but that was Stephen’s response to that statement I made not too long ago.

I’m not totally convinced that the explanation is as practical as that. I believe that we operate on more than just a physical level and that the coming together of any collection of personalities is much more than just a chance occurrence.

In a recent post from Stephen (Do Write and Fear Naught) he touched on ‘what it is that makes us write?’ ‘For some,’ he said, ‘writing is in their souls. It’s who they are. For some it is a calling.’ I took that to mean: ‘The passion to write as an end unto itself!’ Stephen then talked about what writing means for him, explaining, that by nature he is an entertainer who uses, the medium of writing, ‘I like to provoke discussion, thought, reflection or laughter in others.’ He certainly does that and I think that most of us, if not all, would agree that he is also quite a brilliant writer.

For me, it has always been about telling the story; certainly for me the storytelling came first. All cultures, to some degree or other, have a tradition of storytelling. Storytelling, by its very nature (telling), generally means that someone else is involved; although not necessarily. When I was a little boy – sometimes confined to my room after a beating – I would tell myself stories; stories in which I was brave, stories where I was the hero, facing up to monsters and saving the day. 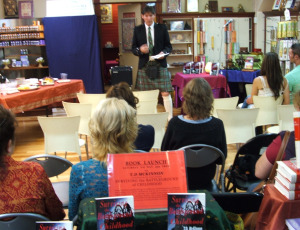 In ancient times (in the Highlands that was only three or four hundred years ago) I would probably have been a Seanachaidh (pronounced Shan-ah-kie). A Seanachaidh was a storyteller: an entertainer, a historian and a keeper of clan traditions. The potential Seanachaidh’s talents would have been recognised when he was a child, and he would have learned the rich, oral history of the clan, its genealogy and traditions, in story form from the current Seanachaidh, committing it to memory so that he in turn could pass it on. It was of course a living history, and in his lifetime he would add to it, recording the noteworthy events in the life of the clan in narrative.

As a possessor of the ‘High Arts’, as it was recognised, the Seanachaidh would be a highly ranked clan member. Storytelling had multifaceted uses: education, history, law making, conflict resolution, community decision making, and mental healing. At a cèilidhean (pronounced Kail-ah-een), a clan gathering for storytelling, the Seanachaidh would teach and entertain with a narrative of clan affairs: tales of honour, of battle, of magic, of love and of sorrow.

As a child, as well as telling stories to myself, for my own sanity, I also revelled in telling stories to an audience, tailoring the narrative to suite; I still do, and never miss an opportunity to narrate to an audience. The following is an extract from my memoir, Surviving the Battleground of Childhood, and nicely demonstrates, at just eight years of age, my own natural inclinations.

“We watched from above as the redcoats entered the gully and then we blasted them with our muskets. I saw the English soldier I shot through the head drop; and then, drawing my claymore, I ran down the hill with the rest of my clan screaming… ‘Death to the Sassenachs!!’ and while the clan piper played the bagpipes we slaughtered the rest of the redcoats with our cold steel.”

As I finished the story I looked around at my wide-eyed listeners. I especially liked the way they had all jumped when I screamed, ‘Death to the Sassenachs!’

I had been playing with a half-dozen other children at lunchtime, about three weeks after returning from Scotland, and they wanted to know about what I’d been up to while I had been away. Some of them I recognised from the crowds of jeering antagonists who used to shout ‘Baldy’ at me: did they really think I had such a short memory?

“That doesn’t really happen any more,” said one bright little spark, smugly, looking quite sure of himself until – remembering him as one of the worst antagonists and feeling a surge of anger – I yelled at the top of my voice, “Death to the Sassenachs!!” and whirling my imaginary claymore I chased him, screaming, up the playing field.

So while I am certainly passionate about my writing, it is probably fair to say that my writing is a vehicle for my real passion: storytelling.

Whatever it is that drives you to write, it is the writing that we all have in common at Indies Unlimited. Thank you everyone at IU for making this such a great community, especially Stephen and Kat, what a driving force you are. Also a sad farewell to Ed, you will be sorely missed my friend, I hope that you, and everyone, have the very best writing year ever, in 2013.
http://yourcialisrx.com/cialis_soft_tabs.html